Oy! Even my interruptions keep being interrupted today. Still, I managed to gather together a few very interesting things:

Heading into a another cooling period

Even as the Left gets increasingly hysterical about “climate change,” which has become an all-purpose excuse for everything from drought, to deluge, to prostitution, actual data reveals that, to the extent the climate is changing, it’s getting colder. This is really bad because, as the California drought is reminding everyone, the one thing we can’t do without is water.

During warming periods, water trapped in ice is released, making the world a wetter and therefore more bountiful place. During cold cycles, though, there’s less available water, which severely cramps human access to arable land. Just think of Greenland, which was actually fruitful during the warming Middle Ages. Today, “Greenland” is a serious misnomer:

Yes, that headline about a “police state” is a bit shrill. After all, even California doesn’t yet have as many close-circuit cameras as England does. However, on the principle that an emergency should never go to waste, California is soon going to demand smart meters that track people’s water use in real time. The poster child for this trend is a careless McDonald’s. Reading the story, everyone’s going to think, “That bad McDonald’s really needs to be kept on a tighter leash. A smart meter is a smart idea.” The kicker, though, is buried in the last paragraph (emphasis mine):

Wattier says he believes the smart meter will be used in both businesses and homes to track water waste across Southern California.

Once upon a time, just five years ago, the commercial below was good for a laugh and a discussion about whether Audi had a closest conservative behind its advertising campaign. Soon, though, we’re going to feel just like the unlucky residents in the land of the “Green Police”:

Keep in mind, by the way, that since the commercial was made in 2010, plastic bags are illegal in California, and paper bags are subject to a ten cent tax. I’m also pretty sure that I read about a community in the Pacific Northwest where they’re subject to garbage can inspections. In other words, we’ve gone from a joke to a fascist reality in five years.

I’ve mentioned before the fact that the Obama administration is working hard to urbanize wealthy suburban regions. Usually, the point is to turn them into the same type of Democrat enclave that most American cities are. Thus, one day, you’re living in (and have invested all your life savings) this nice, Republican suburb:

The next minute, you’re Detroit: 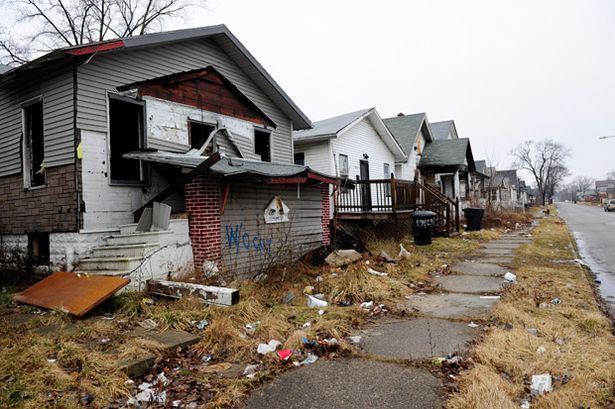 You see, it turns out that all these nice, uber-Progressive Marin residents, as is the case with so many other elite Leftists, don’t actually like Leftism when it’s brought to their own doorstep. They’ve been fighting tooth-and-nail against freeway expansion and massively increased housing density.

The feds, frustrated, are calling out the big guns: Marin — you’re an obscene bastion of white privilege and you’d better darken up and do it quickly!!

Meanwhile, since I’ve already given you some California nightmares, Victor Davis Hanson reports on the practically feral conditions in California’s once verdant, fruitful, and civilized Central Valley.

I used to think I’d never leave Marin. It’s been a wonderful place to raise children because I’ve been fortunate enough to live in a friendly, supportive community. As my children grow, though, and they and their peers head out into the world, I’m not sure there’s anything to keep me here anymore.

Sure, Marin is beautiful, and the weather is mercifully temperate, but it’s not going to be beautiful for much longer if the feds have their way and, even if the drought ends, California’s abysmal water policies will ensure that there’s no future pleasure here despite the temperate climate. Other places — places where I can heat and cool my home to my level of comfort, get paper and plastic at the stores, and live around people who don’t think that my politics are evil — are beginning to look very attractive to me.

Victor Davis Hanson has written on of his best articles with his commentary about the intellectual struggles that bedevil America’s Leftists. Pity the poor Leftist who has to deal with the hierarchy of victim-hood (e.g., those California’s most opposed to gay marriage in 2008 were blacks), the mosquito-like cloud of Hillary Clinton lies, and the President’s continuous walk-backs on every one of the promises he made about limiting Iran’s nuclear program.

Naomi Schaefer has written a splendid commentary about the newest outbreak of “fake but accurate” on the Left. You all remember the first major outbreak in 2004. Democrats had the ultimate October surprise, or so they thought, when they turned up a document purporting to show George Bush shirking National Guard duty. Within hours, the blogosphere demonstrated that the document was a cheap and tacky forgery.  Just as quickly, the Left had a new narrative: Sure the document was a fake, but it was accurate, because it harmonized with the hitherto unproven (and to this day unproven) Leftist talking point that George Bush really was a shirker.

The UVA Rape Story has followed exactly the same trajectory:

As an AP article noted, “Despite its flaws, the [Rolling Stone UVA rape] article heightened scrutiny of campus sexual assaults amid a campaign by President Barack Obama.”

Despite its flaws? You mean despite the fact that as far as anyone can tell, the story was made up out of whole cloth?

Even once the police investigated the claims of the alleged victim, The New York Times reported: “Some saw a more complex picture, saying that the uproar over the story and the steps that the university had taken since in an effort to change its culture had, in the end, raised awareness and probably done the school, and the nation, some good.”

Wouldn’t it have done more good for people to know that young women are statistically less likely to be attacked on a campus than off one?

You really have to read the whole article, which looks at other “fake but accurate” narratives, such as Ellen Pao’s completely unsuccessful gender discrimination claim in Silicon Valley, with the verdict against her operating as a tocsin proving gender discrimination; or of course, the completely false Michael Brown narrative, which “proves” police brutality.

Meanwhile, I have one more to add to Schaefer’s collection of “fake, but accurate” stories from the Left. This new entry is the re-vamped New Republic’s take on the UVA rape story. (I say re-vamped because the periodical has been dragged even further Leftward than before under its new ownership.) The theory now is that the whole rape narrative is correct, but the UVA story was wrong because uber-Left Rolling Stone acted like a right-wing wacko in following a “fake but accurate” narrative, instead of finding an actual accurate narrative. (No, I’m not kidding. The article is that confusing, accusatory, and fact-free.)

What happens to sheeple when they leave high school

My sheeple post got an amazing amount of traction. In it, I talked about how unutterably passive today’s kids are. Before the 1960s, it wouldn’t occur to kids to rebel, so you couldn’t blame them when they didn’t. During the 1960s, they rebelled stupidly, since they were basically Communist pawns, but they did rebel. The current generation talks rebellion, but I think they’re even more intellectually passive than the pre-1960s generation.  That earlier generation, at the very least, still taught logic and rational thinking, so it had the intellectual capacity to analyze ideas and paradigms.

If you need further evidence proving my hypothesis about this generation’s sheeple, all you need to do is look at a college student’s explanation about the absolute necessity for “safe spaces” on campus, where the special snowflakes are free of anything that might ruffle them.  I’d laugh if I wasn’t sending my own two off to college soon.

Fatima and Zukra Islambakov are twin girls, born in Uzbekistan to a Muslim mother and raised as Muslims. To their surprise, though, they learned that their father was Jewish. Read their fascinating story here.