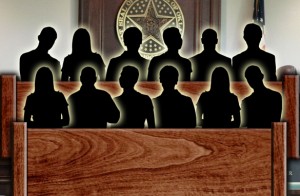 As those of you who are lawyers or who have served on a jury know, I can’t talk about the case beyond saying that it’s a criminal case. In any event, I don’t have anything to say. Today was devoted to jury selection and it was a . . . very . . . slow . . . process. After over three hours, the judge and the lawyers just barely finished questioning the first batch of 18 prospective jurors. None of them have been dismissed yet. I was not in that first batch.

What impressed me throughout this very laborious, time-consuming procedure was how seriously the fifty people assembled in the courtroom took the process. Everyone listened carefully and politely to the court clerk and to the judge. The 18 people who were asked questions that related directly to potential bias answered thoughtfully and struggled to be honest.

Unlike the last voir dire I sat through two or three years ago, none of the 18 tried to give an answer that would excuse service. All but one seemed to believe that, regardless of their personal experiences, some of which bore more heavily on the case than others, they could be impartial jurors who would render their verdict solely on the facts and law revealed during the trial.

What also struck me was the incredibly narrow demographic spread revealed by those 18 people: With two exceptions they were all college graduates, and most had an advanced degree. Except for two full-time moms, they were all employed and some of them had some pretty fine-sounding job titles. I obviously can’t share any specifics with you, but I can say that there were CEOs, CFOs, department heads, JDs, MDs — basically all the people I’d run into at the average event at my kids’ public schools. Marin is a very different place.

The room was also extremely white. Marin people may love the idea of diversity in theory, but in fact they’re seeking out people of the same shade of pallor. I won’t give any specifics about those in the room who weren’t white, but let me just say that I could count them on the fingers of one hand with a few fingers left over (more or less).

My suspicion is that I’ll be dismissed tomorrow. The fact is that I’ve never met a lawyer who’s been chosen to serve on a jury and I doubt I’ll be the first one to break that pattern. Nevertheless, I’ll say what so many of my lawyer friends have also said: it would be interesting to see a case from the jury’s side, rather than from the lawyer’s.