Readers know that I hold no brief for Donald Trump, whom I view as a media-created Big Government demagogue, whose politics have half-tones of both Left and Right ideology, but whose dominant top-note is pure self-interest.  The fact that I dislike Trump, though, does not mean that I dislike or disrespect the majority Americans who support him.  I understand the frustration driving them, although I believe that they’ve put their faith in a false Messiah. Few things, therefore, make me go more ballistic than having Leftists smugly claim that the majority of Trump supporters are racist white men.

It’s true that the majority of Trump supporters are white men, although a lot of other people support him too.  But about that racist bit?  Let’s dig into that more deeply, because it’s a slander by which Leftists manage to avoid looking at their own appalling racism.

Let’s start with racism on the Right side of America’s political spectrum because the media and academia are so excited about tracking it.  It’s true that there are small pockets of old-fashioned white supremacists still wandering around America.  These are people who openly express their belief that any racial or religious groups other than white Christians are inferior and should be isolated, banished, or even killed.

Thankfully, in addition to being disgusting in attitude, these white supremacists are small in number.  Out of an American population of roughly 318,000,000, the high estimate for “hate groups” is only 892 such groups.  This number comes from the Southern Poverty Law Center which memorably, and entirely inaccurately, characterized the entire Tea Party movement as a “hate” group.

While it loves counting “hate” groups, the SPLC is coy about how big these groups are.  I’d be very surprised if any of the listed groups boasted a thousand active members. I suspect most have a few hundred at best.  Still, even if you assume that high of 1,000 active members, you’re still looking at fewer than 1,000,000 hardcore, old-fashioned KKK-type racists — or less than three-tenths of one percent of the American population.

The Left likes to claim that these groups vote Republican because Republican candidates keep “dog whistling” racism.  This is a ludicrous claim to make given that the field, before being winnowed down, had blacks, East Asians, and Hispanics.  It’s the Democrats who have no one to offer other than old white people.  Still, the Democrats sneeringly ask, if Republicans aren’t selling racism, why do the David Duke’s of this world vote Republican?  You have to go back a few decades to figure out the story.

Once upon a time, right up until the early 1960s, the Democrat Party was the openly racist party (more on that later).  However, when the 1964 Civil Rights Act, and LBJ’s electoral strategy (more on that later too) meant that the Democrat Party started courting blacks, rather than actively discriminating against them, the white supremacist groups needed to find a new political home.

After 1964, government could no longer be the supremacists’ ally — and do remember that it was Southern government that gave Jim Crow its control in the South.  The supremacists therefore concluded that their best bet was small government.  They reasoned that small government would mean less welfare, and less welfare would harm the black population (I’ll get to that later, too).  That’s why so many such groups came out of the woodwork when Ronald Reagan was elected — and became even more excited when Ron Paul, a solid libertarian, tied himself to the Republican party.  With white supremacists having discovered the virtues of limited government, the Republican Party unwillingly had its minute population of fringe racists and the Democrats had their narrative:  “Republicans are racist.”

What’s really funny, of course, is that the really racist political party in America is the Democrat Party.  Worse, among Democrats, the racism isn’t confined to a minute fringe (less than 3/10 of 1% out of the American population) as the case with the Republicans.  Instead, institutional racism is front and center in every Democrat Party policy.

Every time a Democrat tells you that all Americans must lose their guns because blacks are dying in (Democrat-run) ghettos, or that we must have welfare or blacks will die, or that schools have to stop enforcing discipline because it’s unfair to blacks, or that universities must lower standards because otherwise it’s unfair to blacks, or that voter ID is unfair to blacks, think about what that Democrat is really saying.  Translated, what the Democrat is really screaming inside is “I hate blacks.  I think they’re stupid, lazy, uneducable, and that they deserve to die.  Indeed, the only reason I keep them around is because, as LBJ said when he embarked on the whole Great Society welfare program, ‘I’ll have those n****rs voting Democratic for the next 200 years.’”

Here’s the reality:  If you do the opposite of everything Democrats advocate, you are showing respect for blacks and giving them greater opportunities than any Democrat ever could or would:

In addition to the Democrat habit of treating their permanent black constituency as stupid, uneducable, and too violent to bear the burden of self-defense, Democrats love to traffic in the same racist imagery that was popular back in the post-Civil War South from Reconstruction through to the dying days of Jim Crow.  They get away with it because they turn this classic racist venom on any blacks who dare to be conservative. “We’re not racist; those turncoat blacks have abandoned their identity and can therefore be dehumanized, demeaned, and destroyed.”

In 2011, when Herman Cain looked like a viable Republican candidate, the hard Left went into full KKK mode against him.  That didn’t surprise those of us who remembered the utterly vile attacks leveled at Condie Rice for daring to be a high level conservative.  What sticks in my mind are the political cartoons Leftists created to attack her. 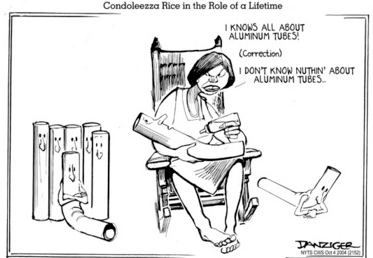 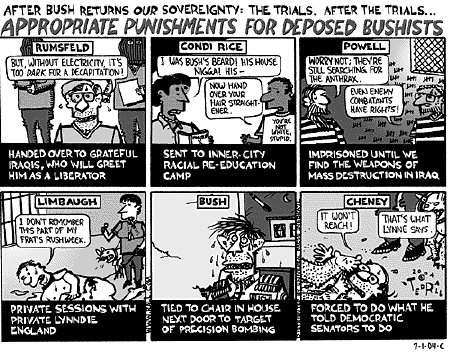 And of course, for more than 20 years Leftists have taken unending racist umbrage at Clarence Thomas for daring to be a conservative voice on the Supreme Court.  The attacks on him didn’t stop with the disgraceful attempt to cast him in the Jim Crow mold of a lust-filled black man.  From the day Thomas arrived on the Court, the Left contended that he was a brainless cipher, simply piggy-backing on “Massa Scalia’s” brain.  When Scalia died, in addition to unseemly rejoicing about his passing, Leftists let their bile spill onto Justice Thomas, who they claimed would be incapable of functioning without Scalia to guide him.

Remember this:  There is no greater racist than a Progressive scorned.

It’s time now for me to return to the major premise of this post, which is that it is a libel to say that Trump’s supporters are racists.  Yes, there are certainly racists among Trump’s supporters.  (And so far as I know, Trump has not loudly disavowed these people, which I hold against him.)  But keep in mind that, while racists are a microscopic part of the American population, and therefore a microscopic part of the Republican Party and of Trump supporters, racists are at the front and center of the Democrat Party — so let’s not get our knickers in a twist about this whole thing.  Those on the Left who lob “racist” rocks at Republicans are living in a seriously glass house.

Once one removes the small number of true racists from Trump’s supporters, you’re left with a lot of people who are gosh darn tired of being called racists for holding two views that have nothing whatsoever to do with race.  View One is that there is a difference between legal immigration and illegal immigration.  Legal immigration reflects the will of the people through Congress.  If we want lots of immigrants, we can elect a Congress that passes laws increasing the number of immigrants invited into America.  If we want few immigrants, we can elect a Congress that does the opposite.  In either case, the number of immigrants reflects the will of the people, with time telling whether we chose wisely or foolishly.

What we have here, though, is the immigrants themselves doing the deciding about American immigration policy.  In defiance of America’s laws, they’re deciding to immigrate and, in further defiance of America’s laws, Obama’s administration is encouraging their illegal acts.  Americans who oppose illegal immigration aren’t opposing a race; they’re opposing the complete breakdown of American sovereignty and the rule of law.  That’s not racist, that’s sensible.

View Two is that Americans, having look at the bloody results of unlimited Muslim immigration into Europe (not to mention Muslim episodes at Ft. Hood, in Boston, and in San Bernardino) — especially immigration that contains within it radicalized and well-trained ISIS operatives — are behaving perfectly intelligently and reasonably when they want to halt the immigration process for the time being.  Until we have a handle on controlling the influx of radicalized Islamists, there’s absolutely no reason why we shouldn’t impose a temporary moratorium on Muslim immigration, or immigration from countries known to be radicalized, or immigration from countries with no useful security records, or all of the above.

When Iran had its revolution and captured the American embassy, Jimmy Carter stopped Iranian immigration and no one made a peep about it.  Considering that ISIS, al Qaeda, and other Islamic fundamentalist groups are at war with us, a moratorium is reasonable, not racist.  And in any event — and this seems to be a hard concept for the Left — Islam is not a race, it’s a faith.  People who want to halt the unlimited Islamic influx into the West will happily stop Chechens, Yugoslavians, and Serbians too, despite their being white.

So no, people who have been drawn to Trump’s loud statements about stopping illegal immigration and pausing Islamic immigration are rational, not racists.  Again, if you want to see the true racist party, look Left.

One more thing.  Trump isn’t the only Republican who’s stood against illegal immigration and urged caution about allowing Muslims in for the time being.  All of the other Republican candidates made much the same proposals in one form or another.  The real difference between Trump and the rest is that (a) he’s very loud and (b) the media gave him much, much more coverage than the other Republican candidates on the same issue, despite the fact that he was all hat and no cattle — that is, he talked loudly about his goal, but had (and still has) no practical idea how to make it happen other than his insistence that his will is law, an idea that is antithetical to the Constitution.  Regarding that excessive coverage, keep in mind that, when the full Republican field was still out there (16 candidates), almost half the MSM airtime went to . . . Trump.

Now ask yourself a few questions:

To summarize:  A very small percentage of Republicans, sadly, are white supremacists.  It is our cross to bear and our candidates should denounce them.  However, the entire Democrat Party is racist, pushing policies that show that Democrats view blacks as stupid, helpless, uneducable, and ineradicably violent.  Despite (or perhaps because of) its deep racism, the Democrat Party loves to castigate Republicans as racists.  Trump’s candidacy has redoubled the energy with which Leftists use that canard against Republicans.

The reality, though, is that — other than the Republicans own small crew of white supremacists and those Democrat racists who are undoubtedly part of the the 19% of Democrat crossovers (!) who support Trump — people who support Trump are not racist, they’re rational.  They understand that a stand against illegal immigration has nothing to do with racism and everything to do with the rule of law and national sovereignty.  And they also understand that, even if you’re determined to pretend that you’re not at war with radical Islamists, the fact that they’ve announced that they’re at war with you makes it entirely reasonable to halt some or all Islamic immigration into this country until we have a fairly functional method to separate the Muslim wheat from the radical Islamist chaff.