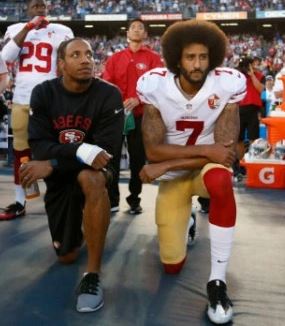 Living in a free country means that Kaepernick and his imitators have the right to take a knee when they hear The Star Spangled Banner. Having a right, though, doesn’t mean that you are right.

When it comes to Kaepernick & Friends, those people who feel offended by their disrespectful gesture are right to feel that way: There’s nothing noble about virtue signaling, which is all that these highly paid athletes are doing. It’s a meaningless, painless activity that simply puffs up their profile in the drive-by media.

Things would be different, however, if they engaged in true acts of civil disobedience. Doing that might earn them respect even from those who disagree with them.

Back in the day, civil disobedience used to mean something very specific. Although long a recognized part of Anglo-Saxon and English culture (mostly through jury nullification), it was Henry David Thoreau, in the mid-19th Century, who best articulated the doctrine we now recognize. Thoreau objected to a poll tax because he felt the money was being improperly spent to support slavery and the war with Mexico. Rather than paying the tax, he took a principled stand, refused to pay the tax, and went to prison.

As it happened, Thoreau’s friends quickly bailed him out, so he did not have much time to glory in his martyrdom. Nevertheless, this single night in jail inspired Thoreau to write the definitive essay about a citizen’s obligation to strike out against unjust laws and practices — and to demonstrate the law’s invalidity through each citizen’s personal martyrdom. Significantly, Thoreau felt that such a principled stand gained weight from an attendant sacrifice, which is usually imprisonment:

Under a government which imprisons unjustly, the true place for a just man is also a prison. The proper place today, the only place which Massachusetts has provided for her freer and less despondent spirits, is in her prisons, to be put out and locked out of the State by her own act, as they have already put themselves out by their principles. It is there that the fugitive slave, and the Mexican prisoner on parole, and the Indian come to plead the wrongs of his race should find them; on that separate but more free and honorable ground, where the State places those who are not with her, but against her–the only house in a slave State in which a free man can abide with honor.

How things have changed in America. If you’re a Leftist, you get to break the law or with community norms . . . and receive only loud applause. I first realized that true, sacrificial civil disobedience is a dead letter for Lefties in February 2004, when San Francisco’s then-mayor, Gavin Newsom, suddenly announced that he was going to ignore California’s laws against same-sex marriage, and have the City issue marriage licenses to all gay couples desiring them. The Press oooh’ed and aaah’ed about his bravery, and gave him a platform he used to leverage himself to California’s Lieutenant Governorship and, he hopes, one day sees him seated in the governor’s office itself (helped by his current campaign to destroy the Second Amendment).

But, really, what did Newsom do 12 years ago that was so brave? He wasn’t running any political risks in San Francisco, where a critical mass of voters supported his decision. He wasn’t running any risk of being humiliated or ostracized because he instantly became the media’s darling (something he knew would happen). No one even mentioned prosecuting him for breaking the law or impeaching him for violating his official obligations. It was definitely a media stunt — and it equally definitely was not civil disobedience because we didn’t get the spectacle of a righteous man felled by an unjust government.

Contrast Newsom’s treatment to that meted out to Kim Davis, the Kentucky woman who was willing to martyr herself to take a stand against being forced to put her name on same-sex marriage licenses. She ended up spending five days in jail, was sued, and was vilified in the American media. (Incidentally, she’s a Democrat, which I find charmingly ironic.) The mainstream media still excoriates her, despite the fact that she actually took a principled stand against her government, complete with all the attendant risks.

Here’s what’s really going on. Civil disobedience is out; virtue signaling is in.  While James Bartholemew did not invent the phrase, he’s generally credited with making it known, so I’ll turn to his essay for a definitive description of the new way to protest without risk or pain:

Go to a branch of Whole Foods, the American-owned grocery shop, and you will see huge posters advertising Whole Foods, of course, but — more precisely — advertising how virtuous Whole Foods is. A big sign in the window shows a mother with a little child on her shoulders (aaaah!) and declares: ‘values matter.’

The poster goes on to assert: ‘We are part of a growing consciousness that is bigger than food — one that champions what’s good.’ This a particularly blatant example of the increasingly common phenomenon of what might be called ‘virtue signalling’ — indicating that you are kind, decent and virtuous.

It’s noticeable how often virtue signalling consists of saying you hate things. It is camouflage. The emphasis on hate distracts from the fact you are really saying how good you are. If you were frank and said, ‘I care about the environment more than most people do’ or ‘I care about the poor more than others’, your vanity and self-aggrandisement would be obvious, as it is with Whole Foods. Anger and outrage disguise your boastfulness.

In the jargon of economics, the assertion of moral superiority is a ‘positional good’ — a way of differentiating yourself from others.

There was a time when Britain had a form of Christianity in which pride was considered a sin. Maybe that is part of why some of us find all this virtue signalling obnoxious. It’s just showing off.

Kaepernick’s grandstanding meets every one of the “virtue signaling” metrics. By allying himself with the Black Lives Matter movement, he signaled to Progressives (read: the media) that he is one of them — and, more particularly, he is signaling to his black Muslim girlfriend and her cohorts that he’s seriously on board with their agenda. (Yes, cherchez la femme strikes again.)

It’s irrelevant to Kaepernick and those he seeks to impress that, with police withdrawing before the BLM onslaught, more black lives than ever are being lost. What matters is that Kaepernick is saying very publicly that he’s on the Progressive side of the ideological war the Left has started between cops and killers.

Kaepernick has also signaled that he hates something: In this case, our national anthem, which he deems symbolic of black lives dying. It does not matter that the song’s long-ignored missing verse has nothing to do with slavery. Indeed, only an ignoramus (by which I mean all Progressives) would think that, if the word “slave” appears anyway in a song’s lyrics, the song must be a rousing anthem to slavery. A literate reader easily understands that the song simply asserts that an American victory means that Americans will beat back the British “hirelings” and “slaves” (presumably pressed sailors and other bribed or coerced troops):

And where is that band who so vauntingly swore,
That the havoc of war and the battle’s confusion
A home and a Country should leave us no more?
Their blood has wash’d out their foul footstep’s pollution.
No refuge could save the hireling and slave
From the terror of flight or the gloom of the grave,
And the star-spangled banner in triumph doth wave
O’er the land of the free and the home of the brave.

Accuracy doesn’t matter, though, to virtue signalers. As Bartholemew notes, the real point of Kaepernick’s stand (or refusal to stand) is that he’s telling us just how good he is. This is how he — a failed, disliked quarterback — is trying to raise his economic profile. He’s different from other quarterbacks. He’s a thinker, no matter how stupid or ill-informed the thoughts.

So, as I said, I’m unimpressed by Kaepernick and all his kaeper-copy cats. If these athletes really wanted to make a point, instead of grandstanding before a supportive media, they could tithe 90% of their impressive salaries to beleaguered inner cities, or they could quit their well-paying jobs to become community activists, or they could miss games (putting their careers at risk) to participate in marches through inner cities, or they could do any other of dozens of things that would put their money, their professions, or their freedoms on the line. But all they do is take a knee. Talk about passive aggressive pathetic.

But you, dear readers, have a magical power that you may not even realize you have and one, moreover, that puts you on a higher moral plane than the National Anthem protesters:  By making a sacrifice of your own, you can help these precious athletic snowflakes transition from being shoddy little virtue signalers to becoming true martyrs in the panoply of civil disobedience.

All that you need to do is stop going to or watching on television any game involving players who take a knee for our National Anthem. After all, the NFL’s bottom line is always its bottom line. It will quickly make martyrs or penitents of those players who cost it money. The same is true for the other leagues.

I understand that, for those of you who are devout fans, staying away from the stadium and the television will entail a significant sacrifice on your part. However, on the positive side, you’ll save money, have more time with your family, make your spouse happy by doing more chores, and, unlike Colin Kaepernick, you’ll actually have put yourself on the line to make a point.