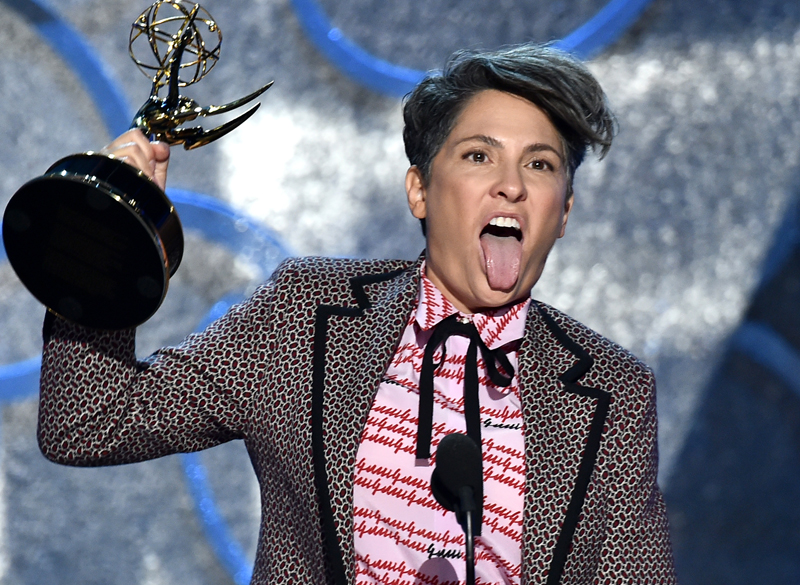 I never watch the Emmys, and I say that with a great deal of pride. As last night’s anti-Trump exhibition showed, television is no longer about either entertaining or informing the American people; it is, instead, about “progaganda.” That’s not a typo. It’s a great neologism my friend Wolf Howling came up with to address the fact that whether watching their shows, attending their schools, or listening to (or reading) their news, you will be made to embrace the Progressive agenda.

For those who have drunk the Kool-Aid, it’s irrelevant (a) that the Progressive agenda has come close to destroying black America; (b) that it is making America incapable of defending itself against the radical threat of fundamentalist Islam; (c) that it is anti-science insofar as it pretends that the XX and XY chromosome pairing in humans is meaningless or that the planet is melting, all actual evidence to the contrary; (d) that it is aggressively trying to destroy the First Amendment’s promise that people can hold to the core tenets of their faith without government prosecution (except when those tenets tell them to bomb, behead, shoot, or stab others); and (e) that it pushes a vision of Big Government that, when carried to its logical conclusion, invariably ends up with government killing more people than all the individual “haters” or gun “nuts” or “Bible clingers” combined. What matters to the Left is that it feels good about itself. Its intentions are all to help the “little people,” never mind that the effect of those intentions predictably destroys those it aims to help.

This intro brings me to Jill Soloway, celebrated in Hollywood for having made a show about a transgender person who, if I understand correctly, pretends not to have paired XY chromosomes, but insists instead on being treated as a person with XX chromosomes. (I have to admit that I’m always confused about the terminology: what does “transgender man” or “transgender woman” mean? I cannot tell if the sex modifier in those phrases refers to chromosome reality or body dysmorphic wish-fulfillment.)

Solway, rather than accepting her award with a polite thank-you took it upon herself when backstage to let America know how evil those who don’t embrace Progressive thinking really are:

So Jews were otherized in Nazi Germany to gain political power for Hitler, and right now Donald Trump is doing the same thing. He’s otherizing people. He calls women pigs if they don’t look like beauty pageant contestants. He blames Muslim and Mexicans for our problems. He makes fun of disabled people. This is otherizing with a capital O, and has been used in our history before to start and win wars, and he needs to be called out every chance he gets for being one of the most dangerous monsters to ever approach our lifetimes. He’s a complete dangerous monster, and any moment that I have to call Trump out for being an inheritor to Hitler, I will.

Now, much as it pains me to admit it, Solway’s right partially. There is a presidential candidate who is openly “otherizing people,” entirely dismissing their humanity, and making it quite plain that they are so evil that they cannot be saved but are, instead, a blight on the body politic. It’s just that Solway got her candidate wrong:

You know, to just be grossly generalistic, you could put half of Trump’s supporters into what I call the basket of deplorables. Right?

The racist, sexist, homophobic, xenophobic, Islamaphobic — you name it. And unfortunately there are people like that. And he has lifted them up. He has given voice to their websites that used to only have 11,000 people — now how 11 million. He tweets and retweets their offensive hateful mean-spirited rhetoric. Now, some of those folks — they are irredeemable, but thankfully they are not America.

That’s dreadful. What follows is unintended human as Hillary explains that real Americans (not haters) are being destroyed by the government — the Obama government, that is, the one that Hillary supports and promises to extend.

Here’s some reality:  When one digs down into Trump’s statements and actions, they are anything but contemptible. Regarding illegal immigrants, he has said nothing bad about Hispanics per se. Instead, he noted accurately enough, that there’s strong evidence that the Mexican government encourages bona fide criminals (murderers, rapists, pedophiles, drug runners) to leave Mexico and head to America, or at least is incapable of dealing with them within Mexico’s borders, allowing them room to flee to America.

If the government is indeed encouraging the criminal exodus, they are following in British footsteps. In the 18th century, Britain routinely sent its criminal classes to North America, South America, and the Caribbean and, when those places ceased to fulfill that function in the 19th century, it sent its criminals to Australia. It’s cheaper and easier for a government to kick criminals out than it is for a government to imprison them.

Likewise, Trump did not make a blanket anti-Islam claim. He pointed out — accurately — that Islam has a terrorism problem and that the Obama administration is doing nothing to protect Americans from potential incoming terrorists at our borders. Instead, the administration is doubling down on bringing as many unvetted (and, given the situation in Syria, impossible to vet) Muslim immigrants into America.

Trump made the entirely sensible suggestion that we stop admitting Muslim immigrants from known terrorist hotspots until we have a system in place by which we can weed out the ones more likely to try to kill us — say, people like Ahmad Khan Rahami, the Muslim Afghani immigrant who planted large bombs in New York and New Jersey. Admittedly, no system will catch everyone. For example, the Somali-born knifeman in St. Cloud, Minnesota, came here as a three-year-old. Still vetting the older, more radical Muslims in the Minnesota Somali community, rather than just inviting them in, might have prevented him from becoming radicalized.

Finally, no, Trump did not deliberately mock a disabled New York Times reporter. He was just being Trump and it was the dishonest, mainstream media that capitalized on the situation so as to spin it to their advantage.

Here’s the deal: When it comes to progaganda and the insults Progressives heap against conservatives, you have to understand that every insult is a projection. The Progressive progagandist looks deep into his or her heart, sees all the hate there — the belief that blacks are inferior and must be controlled by whites, the belief that Americans are evil and deserve to be poor and suffering, the belief that Jews are monsters destroying Muslims, etc. — and projects it onto conservatives. They accuse us of being what they are.

I suspect that, at this point, some of you are thinking “but the Alt-Right is vile.” I’d rephrase that to say that vile people have populated the fringes of the Alt-Right. Most, I suspect, are young people, primarily young men, who have been attacked by the Left throughout their school years (elementary, middle, high, and college) for being male, for being white, for being “white privileged,” for being straight, for being all the labels and insults that the Left heaps uses in its — what was it Soloway said?  — “otherization.”

They’ve also been told for their entire lives to shut up and say nothing in their defense because anything they could say merely proves are vile and unacceptable they are. These young people are no longer interested in being censored. Now, like the two-year-old who suddenly finds himself released from the strictures prohibiting “nasty” toilet talk, they’re saying “doo-doo, ca-ca, and poop” to their little hearts’ content.

In any event, please remember that there is a difference between the truly nasties who are on the fringe of the already fringy Alt-Right, and the deep wellspring of hate that is central to the modern Democrat party. Alt-Right gets kicked off of college campuses. The hate-filled Progressives, on the other hand, take over your colleges, your television, your magazines, your newsrooms, etc. Who’s worse and who’s more dangerous?

By the way, if you like posts such as this one, which analyze politics and social issues through a conservative prism, I highly recommend that you check out WOW! Magazine, a collaborative site to which I contribute. The Watcher’s Council has always been known for the depth and breadth of its weekly analyses. Now, though, you don’t have to wait a week. You can get it every day.