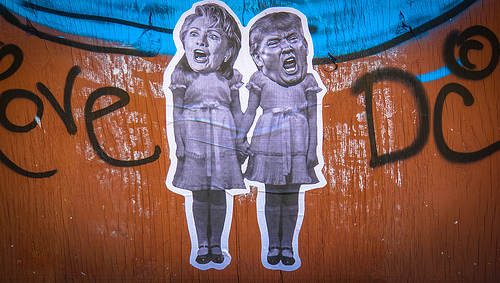 A Progressive friend is relentlessly pushing “Trump is awful” stories on me. I, a conservative, invariably counter by pointing out that Hillary’s list of sins and failures is infinitely worse.

I realized yesterday that my arguments are irrelevant. My friend will never vote for someone who is not 100% pro-abortion, pro-socialized medicine, or pro-open borders.  Given a choice between a rotting dead body that is pro-Abortion and a genuine angel from Heaven that is pro-Choice, he’d vote for the rotting body every time.

Even as we endlessly talk down the other side’s candidates (because few people are really comfortable talking their own candidate up in this bizarre election year), what really matters is the ideological divide underlying this election. The following list might help you decide on which side of that divide you live. Once you decide, do remember that you will never get people to accept your candidate, no matter how flawed their own candidate, until you get them to accept your ideology.

(I’ll be out and about today, but if you add more couplets to the comments, I’ll try to update this post.)

UPDATES: My brilliant readers have chimed in. Thanks to Danny Lemieux for the first two suggestions, Jedi Jones for the third , and Servo 1969 for the fourth:

The role of government