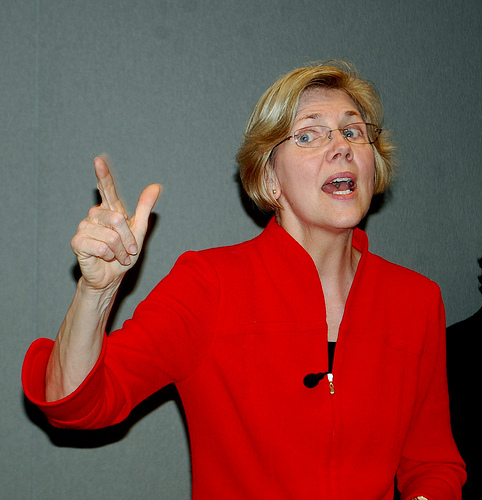 Conservatives never took to the streets and abandoned themselves to mob violence. That is a strictly Leftist activity. There’s a straight line from shakedown artist Al Sharpton’s Tawana Brawley circus to the dangerous freeway obstructions that the Left currently loves to so much. These are not about freedom of expression; they are a form of blackmail directed at a functioning society.

Conversely, Tea Party rallies, which were directed at Obama’s policies, not his legitimacy, were cheery affairs, after which the attendees cleaned up their litter.  This was true political expression, not mob violence.

Even worse than mob violence, though, is the Progressive attack on democracy itself. What Progressives are doing is drastically more dangerous than the fact that a significant subsection of conservatives were convinced that Obama, who baited them by hiding his birth certificate, failed to meet the constitutional requirement that he be a native-born American.

(Incidentally, my feeling has long been that he was indeed born in Hawaii. What I think he’s hiding is in the transcripts, which will probably show that he falsely claimed Kenyan or Indonesian birth to get admitted into college and to obtain financial aid. And of course, they’ll show that “the smartest president ever” was a really bad student. This is just a theory, though, and I freely admit that I have no evidence to support it.)

Yes, many conservatives did attack Obama vigorously in an effort to roust him from office and, as the Progressives love to note, Trump was part of that “birth certificate” constituency. The important thing to remember, though, is that this conduct was directed against Obama. The goal was to prove that Obama was unqualified ab initio and had no right to be in the White House.

Progressives are doing something much more extreme than attacking a candidate (although their frenzied effort to equate him to Hitler is dire and dangerous): They are challenging the entire republican democratic process that underlies America’s smooth and safe transition of power every four to hate years. While their hatred is directed at Trump, they’re attacking the heart of the country itself. Moreover, they’re escalating.

It started with the Progressives’ risible claims about Russian interference. I’ve assembled arguments debunking the Russian lie here, so I won’t repeat them. The whole thing is especially silly when one considers a state such as Michigan, in which Jill Stein wanted to use her millions to demand a recount, which only has paper not computer voting. Even Nate Silver’s Progressive-leaning — but impressively honest — 538 says that the theory that the Russians rigged the election is entirely inconsistent with actual voting patterns and, indeed, with the reality that each state has a different way of recording votes.

Not content with ludicrous and impossible theories involving cagey Russians (who were our friends when Hillary sold them 20% of our uranium reserves or when Obama promised more flexibility and then invited them into Syria), Progressives moved on to attacking the Electoral College (“EC”). One of their core attacks is the boring trope that, as is true of everything else in America, it’s “raaacist.” To that end, CNN found some pathetic and ill-informed Yale-educated law professor to broadcast his ignorance to the world when he said the purpose behind the EC was to mark blacks as less than fully human (three-fifths of human, to be exact). This is embarrassingly wrong.

The EC was intended to serve two purposes: (1) To remove mobs from directly electing the president (and we can see with Progressives how out of control and damn stupid mobs can be); and (2) to ensure that more populous states do not entirely remove the less populous states from the election process. Moreover, the growing repulsion against slavery meant that preventing the larger states from controlling the federal government was a matter of special concern to the Founders because, at that time, it was the slave states’ that enjoyed numerical power, especially if the slaves, who had no civil rights, were counted for purposes of apportioning House members and Electoral College votes.

In 1770, Virginia was the most populous state in the new nation. Moreover, three of the five most populous states were also slave states. With all states jealously guarding their prerogatives, the last thing any small state wanted was to be ruled permanently by the larger states’ interests, especially when those states were invested in the pernicious practice of slavery.

There is a method to the Progressives’ madness, though. Richard Baehr achieved deserved nationwide fame (thanks to a nod from Drudge) when he pointed out that the EC attack is intended to undermine President Trump’s legitimacy. If Progressives can derail the EC process, they will use their myriad bully pulpits to proclaim that, not only did Trump fail to gain the popular vote, he also failed to “win” at the electoral college. That will deny him the ability to resist political opponents by saying, as Obama did in 2008, “I won.”

Trump, wisely or not, waded into the fray when he countered the recount demand by insisting that, but for two million or so illegal votes for Hillary, he would have won the popular vote as well. My Lefty friends on Facebook fell over themselves laughing at how stupid and dishonest Trump was. Indeed, there’s been a debate among Leftists about whether to ban Trump from Twitter for “lying.”

I’m not so sure about that alleged “lie,” though, especially because the mainstream media is the one affixing that label. After all, this is the same mainstream media that helped promote all sorts of lies, ranging from “If you like your doctor, you can keep your doctor,” to “It was a video that caused four American deaths in Benghazi,” to “the earth will be a boiling raisin as of 2015.”

The reality is that, as of now, we have no systematic way to measure how many people are illegally voting. Moreover, you have to keep in mind that, when we talk about “illegal” voting, we not just talking about illegal aliens. Illegal voting includes dead people, felons who live in places that don’t reinstate voting rights after time served, green card holders, and the garden-variety fraudsters who cast multiple votes.

Just for fun, you can keep three facts in your mind as you contemplate Trump’s veracity:

(1) California is home to over 2.5 illegal aliens.

(3) At least one study, focusing only on illegal aliens and green card holders, concluded that they voted in significant numbers in 2014, ranging from possible lows in the ten thousands to possible highs in the millions.

A recent article purports to debunk the study. I’m not going to dig down into that one. I leave it to you to decide whether the study or the debunking is more credible. I will say that the original article posited a broad possible spread,while the debunker claims zero illegal votes — something we know based on actual facts, rather than data theories, is untrue. Given that, I’m inclined to take the whole debunking with a grain of salt.

Another thing about the EC: Hillary knew what it was going in. It was she who made the decision to focus on the states with the most votes in the EC, forgetting that, if you add a lot of little states together, you can end up with a very large number, especially if you win (no question) Pennsylvania and Florida.

Meanwhile, Trump’s Jewish son-in-law (an ethnic and religious identity I emphasize because of the gross canard that Trump is antisemitic) looked at the numbers and devised a different, and plainly better, strategy for Trump. Both parties knew the rules going in, both parties made choices about playing by those rules, and now that the Democrats lost because their candidate made a bad play, they’re crying foul.

Undeterred by their deceitful and ignorant tactics (no surprise, since those never deterred Progressives), Elizabeth Warren has now decided to abandon the American two-party, winner-take-all-system entirely, which is a revolutionary act, and not in a good way. While many sites noticed her inflammatory, but generally garden-variety, Leftist attack on pharmaceutical companies, they missed this gem:

This is a slippery slope argument that attacks our system at the root, leading the way to the guillotine and the gulag.

The American people in the fifty states, using long-standing procedural processes, elected a Republican president and maintained a Republican House and a Republican Senate. Warren, however, is turning her back on those processes, which provide stable majority governance, and is trying to do an end run around the EC and federalism generally. She has told her Progressive coven that they can ignore the federal government as constituted, and act as if the federal government is controlled out of New York, Los Angeles, the San Francisco Bay Area, Seattle, Chicago, Boston, and Minneapolis. Everyone else in America can go to Hell. This is precisely what the Founders feared most.

As I said, what Warren is doing is dangerous and revolutionary. She is attacking a process that has created the longest running republican democracy in the world today. By doing this, she is trying to turn into a violent struggle the peaceful transition of power Americans have enjoyed since George Washington politely and firmly backed permanently out of politics when his two terms in office were over. Thanks to him, America has a remarkably successful “winner takes all system” that prevents factionalism and schizophrenia. In Warren’s world, we’ll be a dysfunctional direct democracy banana republic far removed from the orderly transition and practice of power.

All of the above is why the Progressive temper tantrum is infinitely worse and much more dangerous than the fact that a small cadre of conservatives insisted that Barack Obama had lied about his birth and was, in fact, disqualified from running for office. While conservatives sought to remove from office a single man with a mysterious past, Progressives seek to overthrow the entire American system.