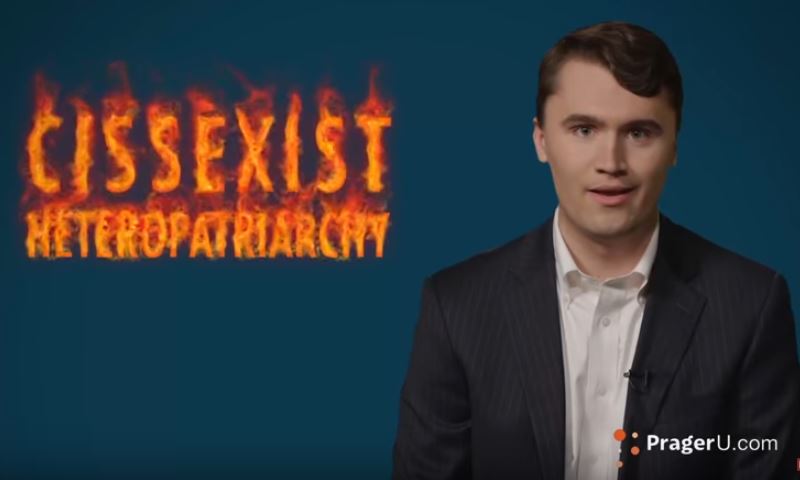 Last fall, I had the pleasure of hearing a talk by Charlie Kirk, founder of Turning Point USA. I wrote about it here. Unlike many in the audience, I already knew most of the facts that Charlie related. After all, I’ve been blogging for years about my kids’ experiences in an upscale American public school system as well as my older child’s Obscenely Expensive Liberal Arts College. I’ve also taken a very depressing look at a variety of modern college course catalogs. (You can find those posts here.)

I’m just an observer, though. I don’t do anything except grumble. Charlie Kirk is a human dynamo who, at 18, created a nationwide organization from scratch that’s dedicated to giving a voice to conservative students on American college campuses. He’s intelligent, informed, and a wonderful speaker. This Prager U video is like a microcosm of the Charlie Kirk phenomenon:

If you’ve been wondering why America’s corporations have a hard-Left mindset that they incorporate into the products they sell and the advertisements they use, it’s because upper management went to college.

If you’ve been wondering why America’s bureaucratic class is hard Left, it’s because the bureaucracy is drawn from college grads.

If you’ve been wondering why American television and print media are so hard Left, it’s because they’re staffed exclusively by college grads.

If you’ve been wondering why Jews are hard Left, despite the Left’s manifest antisemitism and its unholy alliance with hardcore Islam, it’s because Jewish kids are more likely than most other kids to go to college.

If you’ve been wondering why America’s young Asians are hard Left, even though they are a disfavored group under the Leftist rubric (not white, but high achieving, which is just so wrong), it’s because they, like Jews, go to college.

The only exception is in Hollywood. There, actors with inferiority complexes about having skipped college to make a career build up their intellectual cachet by out-doing the college grads when it comes to in-your-face Leftism.

America’s uni-thought institutions of Leftist education corrupt everything they touch. Because they are so central to those American institutions that have the furthest reach into politics and culture, what incubates at college blooms in the rest of the U.S. — and we’re not talking about roses blooming. We’re talking about a profoundly ugly mindset, one that hates America, divides Americans into teeny, warring victim categories, and that is determined to set America on the same destructive socialist path that’s proven to be a failure in every place its been tried.