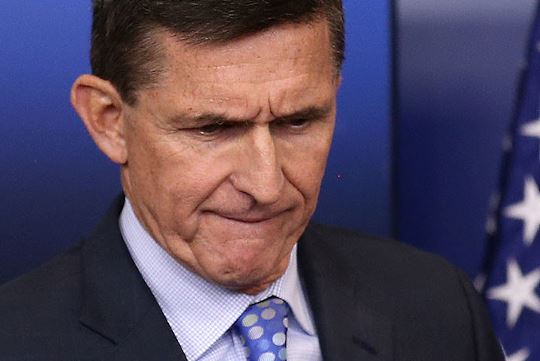 My best guess: Michael Flynn pleaded guilty to telling a lie about legal conduct because he was taking the fall for someone very important.

Michael Flynn pleaded guilty to one count of lying about something that wasn’t a crime, earning himself the very real possibility of jail time. The interview in which he allegedly stated this lie was with FBI agent Peter Strzok.

Strzok is an interesting guy or, at least, has left an interesting trail of slime wherever he’s been. He was was relegated to desk duty in July when Mueller allegedly learned that Strzok had been sending seriously anti-Trump, pro-Hillary tweets to an FBI attorney with whom he’d been having an extramartial affair. I say Mueller “allegedly learned” because I wouldn’t be surprised if Strzok’s affair and his fanatical support for Hillary Clinton weren’t open secrets in the Progressive FBI bureaucracy, just as every Lefty in the business knew about people such as Harvey Weinstein or Matt Lauer.

Strzok was also the man who discretely downgraded Hillary’s overtly criminal act into just a little bit of passing carelessness and interviewed her without putting her under oath or recording the interview. And then, based upon Flynn’s failure to track perfectly conversations that may or may not have been rightfully recorded he ensured that Flynn is facing jail time.

Now that we have a pretty good handle on all of the Big Lies coming out of the FBI and Mueller’s investigation, the big question is this: Why did Michael Flynn plead guilty to lying about something that wasn’t a crime in the first instance?

Thing One: Mueller made it clear that he would destroy Flynn’s son.

Thing Two: Flynn was running out of money.

Flynn did exactly what any parent would do when the money is running low and his child is at risk — he took the fall for his son.

I don’t like Michael Flynn, but I like even less the Banana Republic “justice” that Mueller and his partner in crime, all or part of the FBI, are meting out. You know the bit: “Nice little son you got there, Mikey boy. I bet he’d make a real nice girlfriend for some big white supremacist in prison . . . ’cause prison is where he’s going unless you sign here.”

Funnily enough, with Strzok’s staggering corruption emerging, maybe there’s a smidgen of truth to an incredibly optimistic Liz Crokin article arguing that, all along, Trump has been working on a sting with honest law enforcement to expose the whole corrupt Deep State. This wacky theory has the virtue of explaining why Sessions, instead of acting like the boss of the DOJ, has been acting like the servant of the FBI.

My head says there’s a 99.99% chance Crokin is wrong. My heart hopes that there’s at least a 0.01% chance that she’s right. Because, honestly, if Crokin is wrong and we really are seeing the Deep State in its full pustulant glory, America is in much worse shape than anyone imagined.