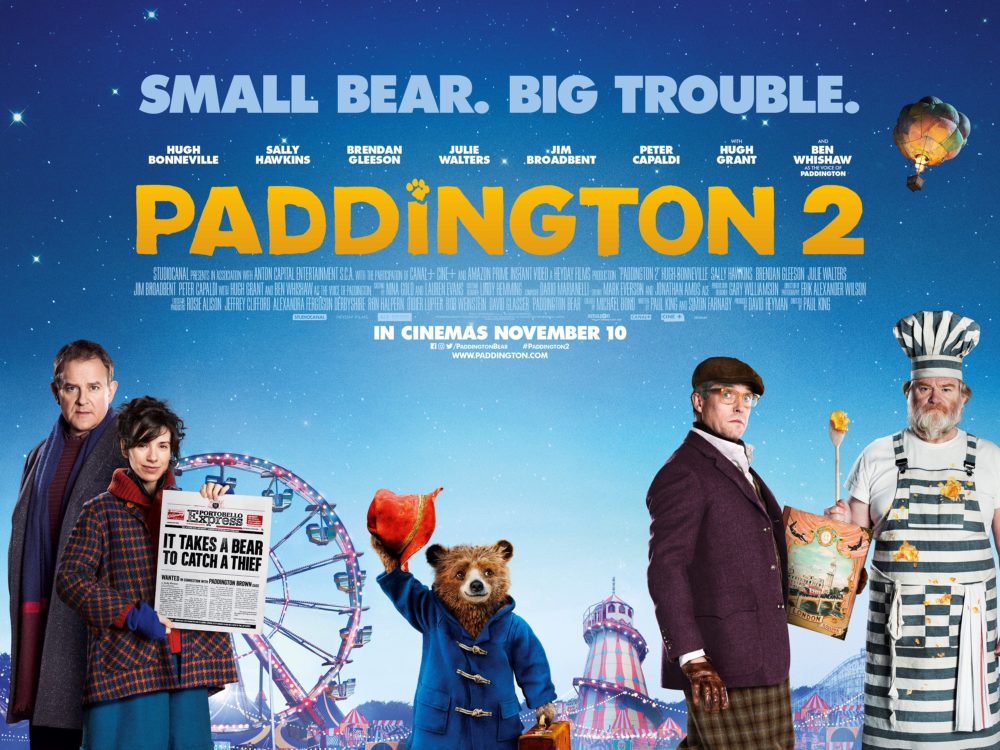 I do not remember when I last saw a movie that charmed me as much as Paddington 2. It’s funny, well-acted, lovely to look at, and has a strong moral center. 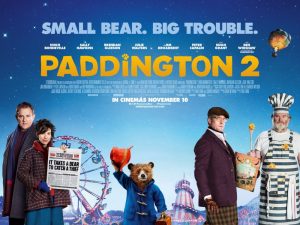 I almost never go to movies, yet in January alone I’ve seen two movies and loved both of them. The first was Darkest Hour, which I wrote about here. The second, which I saw yesterday and am focusing on now, is Paddington 2.

Paddington 2’s plot is simple: Paddington Brown, a bear living with the Brown family on a sweet street in London, wants to get the perfect birthday gift for his Aunt Lucy. He finds an antique pop-up book about London, and then sets about to earn the money to pay for it. The day before he was to have bought the book, it’s stolen — and Paddington is the only suspect. The little bear ends up in prison and the rest of the movie involves Paddington and his many friends working to clear his name. It is, in other words, a generic plot.

What’s not generic is how delightful, charming, warm, funny, and moral the movie is. (And I’m sure I’ve left out some equally apt, kvellingly positive adjectives.) Since one sees a movie, let me begin with the movie’s look. It is total eye candy, without ever being sickeningly saccharine. London is a shiny, sparkling clean City with beautiful colors, occasionally shot from fascinating angles. Even the prison is a pleasant place to see.

Paddington’s computer rendered animation is perfect. For the entire length of the movie, I forgot that I was watching a being that existed only on the computer and the screen. Paddington was a completely three-dimensional character, from the individual furs on his body, to the little skin cells that you see on your dog’s nose, to eyes and ears that conveyed so much emotion they alone deserve an Oscar for Best Actor. Combine these visual pleasures with Ben Whishaw’s voice acting, which perfectly combines warmth and a naive dignity, and suspension of disbelief becomes the easiest thing in the world.

And then there’s the color scheme. I’ve seen many movies of late that were shot in blue tones or yellow tones or pale tones, all intended to convey some grim existential mood. Paddington 2’s palette is cheerful — it’s swimming in warm colors that are never overdone. Watching the movie I felt as if I’d managed to wander into a perfectly decorated house, one with colors that made me happy, but never overwhelmed me.

Set against this happy, but never annoying visual backdrop, is a charmer of a movie. Paddington Brown is all that is good: honorable, polite, cheerful, hard-working, and always full of good will. Despite these manifest (and thankfully non-cloying virtues), Paddington invariably manages to make a hash of things or to carry them out in such an upside down way that the audience’s only possible response is uproarious laughter.

The human actors also do a good job. From Hugh Bonneville, as the pater familias who’s uncomfortably feeling middle-age creeping up on him; to Sally Hawkins, as the good-willed, slightly daffy mother with a will of iron; to Julie Walters, as an acerbic Scots lady, they all show the British habit of perfectly nailing characters, without either under- or over-acting. Even the two young actors who play the Brown children get it just right, being neither obnoxious nor sweetly gooey. The only problem for all of these actors is that they vanish into the background whenever Hugh Grant shows up in a scene.

I first saw Hugh Grant a long, long time again in Lair of the White Worm, a shlocky, funny horror movie. He was nice in the role and certainly good to look upon. In the ensuing decades, I’ve seen him in many movies — Four Weddings and a Funeral, Sense and Sensibility, Bridget Jones’s Diary, About a Boy, and Music and Lyrics, to name just a few examples — and always thought he did a fine job, whether playing a romantic lead or a cad. I also watched him mellow from the biggest jerk in Hollywood to a man deeply humbled by his humiliating arrest for sex with a street corner prostitute. Sometimes life needs to bitch slap us for us to realize where we really rate in the scheme of things.

But before Paddington 2, I had never witnessed Hugh Grant as a purposefully maniacally over-acting scene-stealer. As Phoenix Buchanan, a smarmy, self-regarding actor, Grant is so wonderful he really defies description. The plummy, fake voice; the madly twitching, blinking eyes; the nervous, self-regarding smile — it’s all there, and he never lets up or steps out of character for the entire movie. Grant will never get an Oscar nod for this type of comic turn, but he certainly deserves one.

Another thing to like about the movie is that, although aimed at children, it had no fart jokes, no poop jokes, no smarminess, and no children shooting attitude left, right, and center to befuddled, morally-absent adults. Paddington Brown lives by a strict moral code and those in his world appreciate him for it. This movie will not make your children obnoxious. Indeed, it may actually raise them up to be even nicer versions of themselves. In Paddington’s world, virtue is not a stigma the cool kid avoids; it’s a badge of honor that wise people embrace.

One last thing about the movie. My long-time contention has always been that art — even the “low” art of popular culture — that is true to itself is also morally honest, even if the artist doesn’t intend it to be so.  I believe the same holds true here.

Although the Browns are lily-white and upper middle class, Paddington 2, as befits all 21st century movies, has a racially mixed secondary cast. While making the movie, I’m sure the filmmakers thought to themselves, “Yes, we’re showing the strength of diversity and multiculturalism.” Indeed, regarding that multiculturalism, the only fault I could find with the movie was a subtle undertone, represented through a nasty neighborhood watch character, that lectured the audience against xenophobia — clearly a reference to the discomfort many Europeans and Americans are feeling about the influx of Third World people into their countries.

The problem for the writers and directors is that the only way to show diversity that works is by showing, not a multicultural community in which each character lives in his or her own little corner of victimhood and/or bully, but by showing a melting pot. No matter the characters’ color or apparent country of national origin, they share a nice, middle class Western value system: They’re honest, kind, hardworking, and without hate in their hearts for anyone. They’re all good Englishman, whether they’re black, brown, or criminal. Probably without meaning to, the movie’s creative minds reverted to a pre-1960s American melting pot paradigm, as opposed to the post-1960s “diversity is our strength / everybody is a victim / how dare you offend me” paradigm.

Overall, I give Paddington 2 an A+. If you would like to see a visually gorgeous, extremely funny, heart-warming, morally honest movie, treat yourself to Paddington 2.