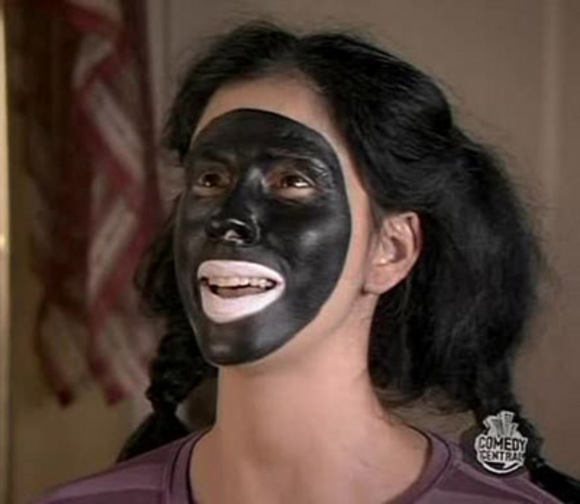 Roseanne has learned the hard way that racial insults (or even racial allusions) are forgiven only when white Leftists make them about black conservatives.

You may have heard that ABC, a Disney subsidiary, cancelled Roseanne’s megahit reboot of her old show. The reason given was that Roseanne sent out a tweet criticizing Valerie Jarrett for being a Muslim Brotherhood stooge and likening her looks to a character in Planet of the Apes.

I gather that the offense was not that Roseanne said Valerie Jarrett holds views common to a murderous, genocidal organization that seeks world domination. The horror of it all was the suggest that there’s a simian look to Valerie Jarrett:

ABC Entertainment President Channing Dungey said in a statement on Tuesday that the network would not be producing the show’s second season.

“Roseanne’s Twitter statement is abhorrent, repugnant and inconsistent with our values, and we have decided to cancel her show,” Dungey told Fox News.

A rep for Barr did not return Fox News’ request for comment. She was also dropped from her talent agency, ICM Partners.

I have a bunch of points I want to make, so I’ll just throw them out here in no particular order:

1. I have no problem with insulting Valerie Jarrett. I won’t expand on that here, but you can check out the following links: this, this, this, and this. I applaud anyone who tackles Jarrett, but you have to make a clean tackle to score a point. Roseanne, apparently unaware of the unspoken rules about arguments that implicate race, made a dirty tackle. If you attack Jarrett, attack her political, social, and economic views. They are easy and fair game.

2. There is no way you can compare black people to anything simian without looking bad. One of the internet’s favorite games is likening celebrities, including political celebrities, to their animal twins. Indeed, for eight years, this was probably the top animal = celebrity image:

Although the picture is kind of cute, it was not meant as a compliment. We all remember the “Chimpy-Bush-Hitler” meme.

Bush isn’t the only famous person whom the internet compared to something simian. A 30-second search yield several more celebrity = simian images: 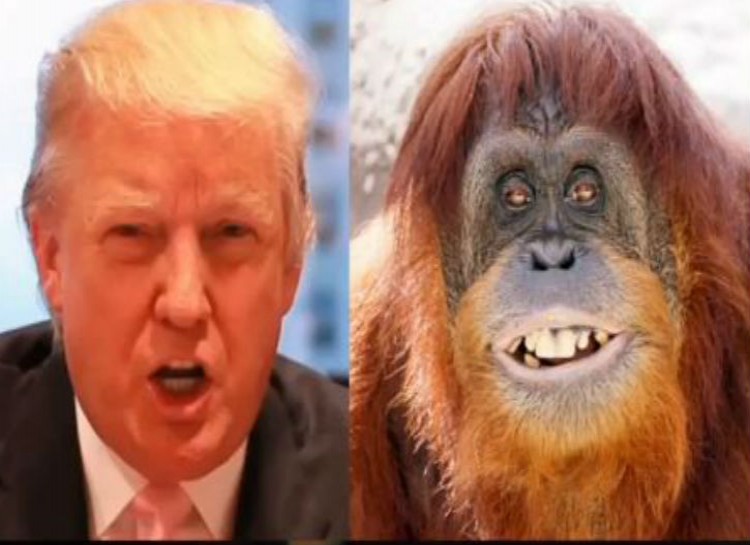 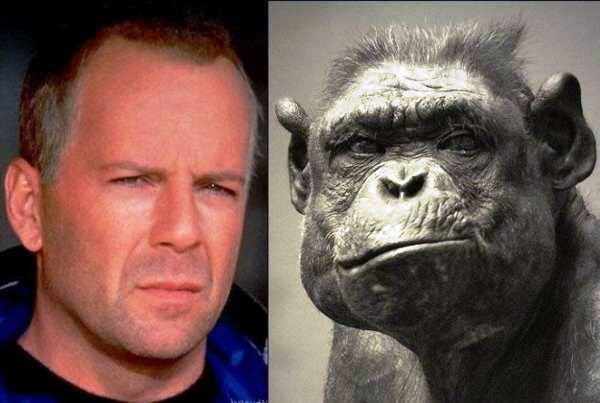 The important thing to note is that all of the men in the above pictures are white. Roseanne transgressed one of America’s major shibboleths, which is that you never liken a black person to any creature in the simian family tree.

I happen to agree with this shibboleth. There are too many centuries of such comparisons in America, and they were always meant to imply that blacks were subhuman. The fact that Roseanne’s comparison was to superhuman simians (the sympathetic, brilliant apes in the rebooted Planet of the Apes franchise) is irrelevant. It simply smells bad thanks to centuries of intentional, demeaning racial prejudice aimed at exploiting blacks and depriving them of the liberties inherent in all human beings.

As an aside, I discovered that you can liken blacks to dogs. It’s obvious why: such comparisons have no ugly historical resonance and everyone likes dogs. 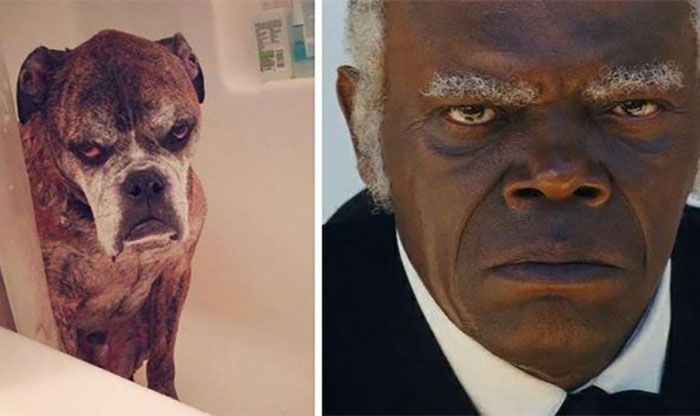 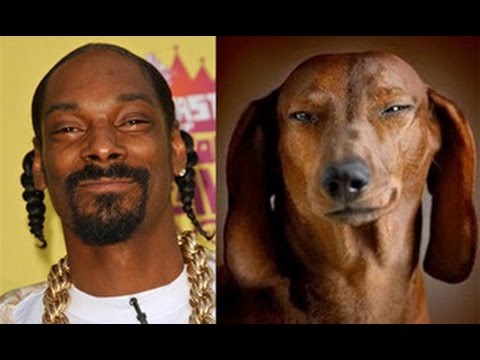 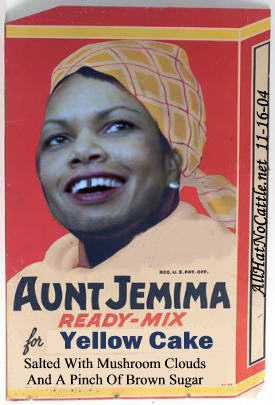 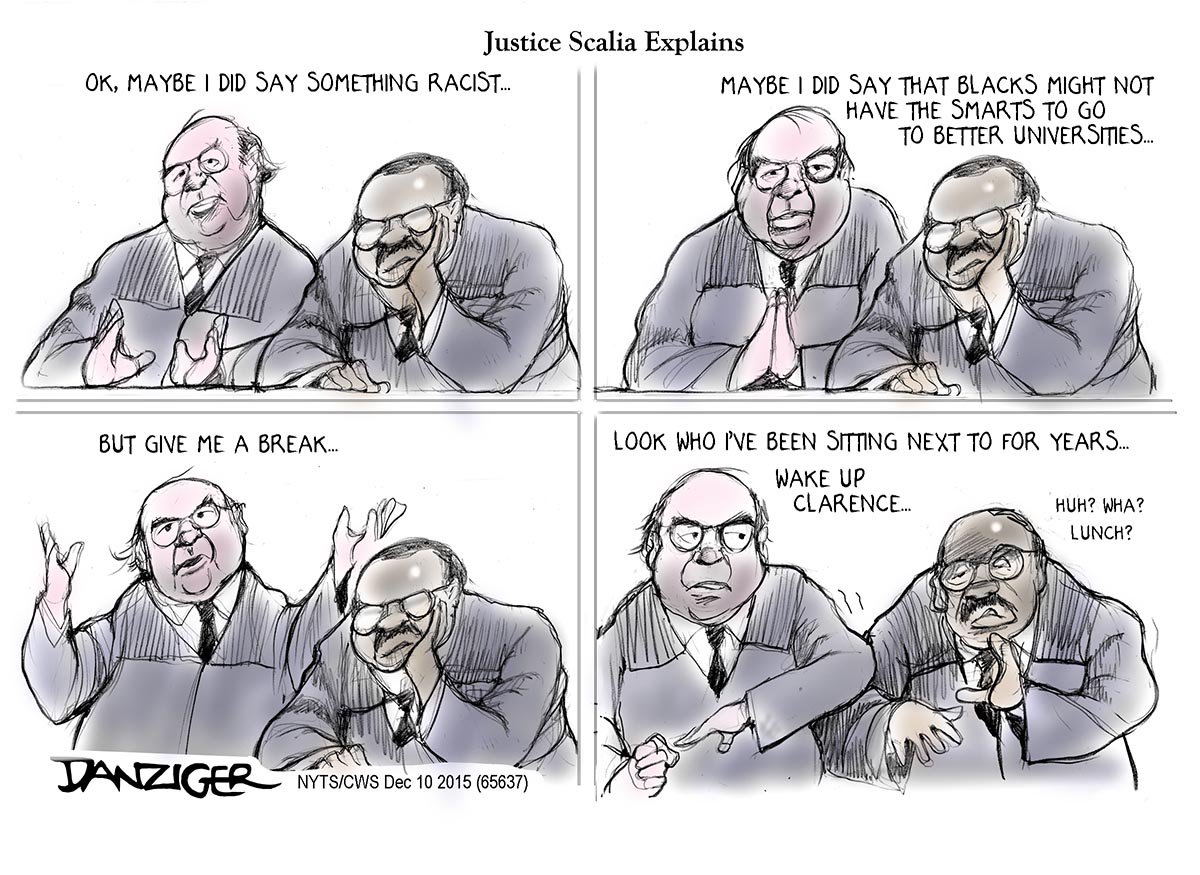 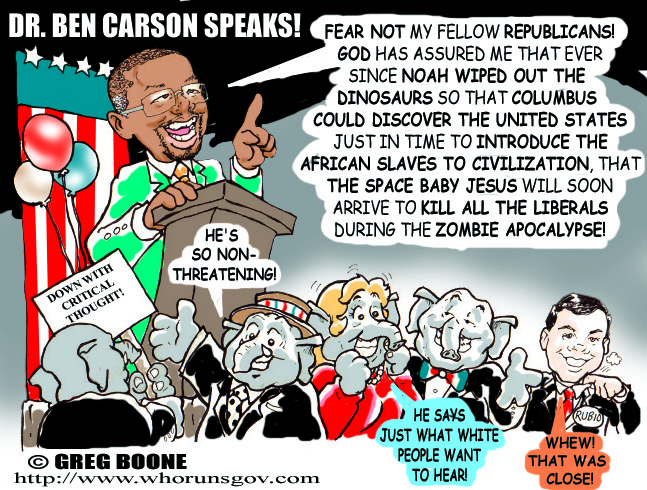 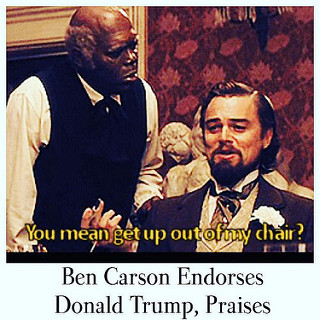 [UPDATE: Just came across the following:

Ben Carson is a monkey of the porch variety. https://t.co/eTwYkfvgjv

Judge is black, but it’s still the same principle: It’s not racist if a Leftist says it about a conservative.]

And of course, who can forget Joe Biden’s and Harry Reid’s memorable moments. Here’s Joe, taking a break from molesting small girls, on Barack Obama:

I mean, you got the first mainstream African-American who is articulate and bright and clean and a nice-looking guy. I mean, that’s a storybook, man.

Biden’s obvious subtext is that it’s a fairy tale in Joe’s world to find black men who are — gasp! — articulate, bright, and clean. Racist much, Joe?

Harry Reid is cut from the same cloth. When Obama first came on the scene, the book Game Change, about the 2008 campaign, reported on Reid as follows:

He was wowed by Obama’s oratorical gifts and believed that the country was ready to embrace a black presidential candidate, especially one such as Obama — a “light-skinned” African American “with no Negro dialect, unless he wanted to have one,” as he said privately. Reid was convinced, in fact, that Obama’s race would help him more than hurt him in a bid for the Democratic nomination. [p. 37.]

Yeah, that’s the old white racist’s preferred black person: essentially not black. Which is pretty much the case for Jarrett:

Racism, whether simian or otherwise, is in the politics of the beholder.

4. ABC was waiting for an opportunity to fire Roseanne, because she’s created a popular platform for alternatives to the Leftist narrative Disney endlessly pushes. Remember, not only does Disney own ABC, it also owns ESPN, which recently rehired Keith Olbermann. He’s the one who memorably tweeted out the following hard-hitting political ideas (click to enlarge): 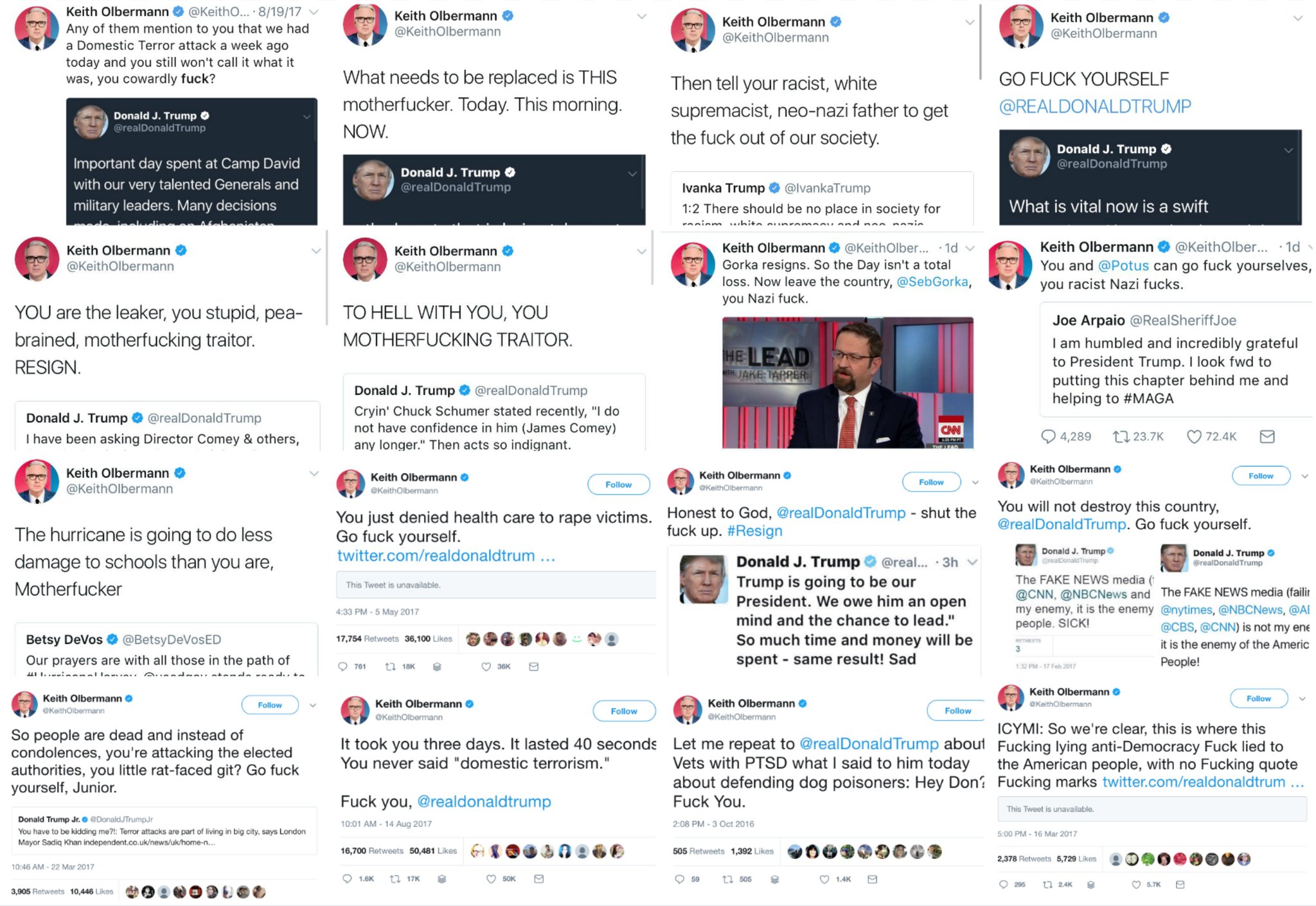 Posing as Adolf Hitler for Heeb magazine in 2009

In a photo-shoot where Roseanne claimed she “Couldn’t wait to breed with non-Jewish people,” she created outrage when she dressed as Adolf Hitler and posed while eating and baking burnt “Jew cookies.” The bizarre moment stirred up accusations that she was a racist, although the publisher defended her, stating: “Heeb is a satirical Jewish culture magazine that interrogates stereotypes and ideas (hopefully in creative ways) that many hold sacred in order to represent the complex and nuanced perspectives that many Jews have about their identities.”

Claiming to be an incest survivor to People in 1991

While standing in front of a large audience at Montview Boulevard Presbyterian Church in Denver, Barr made a very and shocking revelation by telling the group of 1,000 people, “My name is Roseanne, and I am an incest survivor.” Roseanne claimed that she had been sexually abused during her childhood in Salt Lake City. She walked back the statements and told Oprah that she regretted her comments. “The drugs and the combination of drugs that I was given, which were some strong, strong drugs, I totally lost touch with reality in a big, big way.”

Roseanne posted picture of her swollen and bloodied face on Twitter with the caption, “Got in a tussle w bill cosby. U shoyld (sic) see that mfer.” She quickly deleted the tweet and admitted that she, “Joked about tussling cosby,” and her apparent injuries were due to a, “chemical peel to look more sexier.”

Roseanne caught backlash in 1990 when she belted out a less-than-stellar rendition of the “Star-Spangled Banner” while grabbing her crotch in an attempt that was deemed one of Billboard’s “10 Worst National Anthem Performances Ever.” In her attempt at integrating humor into the performance, Barr received criticism from many who believed she was ridiculing of the game of baseball.

I admire Roseanne’s political journey, and her courage in making that journey in Hollywood, but that doesn’t change who she is: She’s an insult comedian who will push to see what she can get away with. As I tried to prove above, had she insulted Tim Scott or Clarence Thomas in the same way, she would have been lauded for her bravery and “speaking truth to power.” As it is, though, she dared to insult the second most powerful (or maybe the first most powerful) black(ish) person in America who — and this is important — is a Leftist.

5. Twitter can make people drunk. Roseanne’s travails reflect the trouble with the twitter bubble. Because she is a huge Hollywood celebrity who cast off the shackles of mindless Hollywood Progressivism, Roseanne has a huge following on Twitter. Every tweet gets thousands of likes and retweets — and this all happens instantaneously.

Even as Roseanne has become something of a pariah in Hollywood, she’s getting all the adulation Hollywood denies to non-Leftist celebrities. It must be a heady sensation not to be fawned upon by the usual greedy, grabby, in-it-for-themselves Hollywood crowd, but to gain respect from ordinary people who admire her independent thinking (even when they don’t always agree with her or when she’s muddled).

Crazy thought: let’s stop letting every one of our national conversations be driven by celebrities. We give way, way, way too much weight to the utterances and opinions of famous people for no other reason than their fame.

Roseanne is a talented comedian and a brave lady who let her principles lead her to challenge the Leftist conventional wisdom that dominates the entertainment world. I applaud her for that. I applaud her for supporting Israel. I applaud her for loving America (even if she can’t sing the National Anthem and made a disrespectful hash of it).

But let’s get real: Roseanne a comedian who trades in insults and boundary pushing. Her mistake was to believe that (a) the Twitter world in which she’s been basking is the real world and (b) that the same racial insults her white Leftist colleagues get away with when made against conservative blacks would be allowed to a conservative comedian making them against Leftist blacks. I don’t think racial insults should be made against anybody, but I’m not going to pretend that she’s not the victim of a nasty double standard.

UPDATE: Thomas Wictor is predicting that another station will pick up Roseanne:

(1) I’m going to write the teleplay for an episode of Season Two of “Roseanne,” which will be picked up by another network after the dust settles.https://t.co/Eub6n9pA4Z

Once upon a time, she would have remained radioactive. Today, though, people are showing less tolerance for the double standards I described above. Again, I’m not excusing Roseanne’s tacky tone deafness. I also know she’s not a racist — and everyone else knows she’s not a racist. This was a Disney hit, pure and simple, aimed at getting rid of a star selling a show that countered the relentlessly Progressive message Disney promotes through all of its outlets.