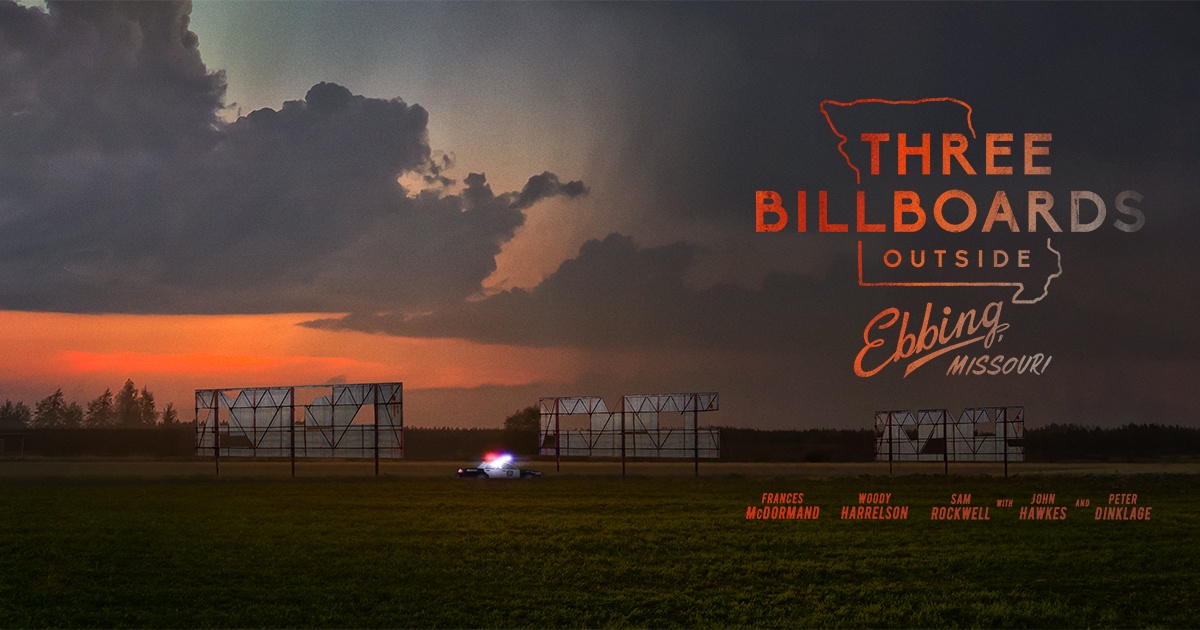 Nineteen minutes into the movie, Three Billboards Outside Ebbing, Missouri spouted two anti-American lies within 15 seconds of each other. Who needs that?

I very seldom can sit through the movies Hollywood has made of late. Indeed, I think the last movies that I fully enjoyed were Darkest Hour and Paddington 2. Three Billboards Outside Ebbing, Missouri is just the latest in a long line of movies I consider unwatchable.

When I sat down in front of our TiVo to watch HBO’s showing of Three Billboards, I had no preconceived notions about the movie. I hadn’t paid any attention whatsoever to it when it came out and knew nothing about the plot. I was vaguely aware that Frances McDormand won an Oscar for it, but I only knew that because she made some mindless #MeToo speech or something like that at the Awards ceremony.

The movie lost me from the get-go because all the actors mumble. I don’t mumble, I don’t like being surrounded by mumblers, and I certainly don’t like a movie that requires me constantly to rewind to try to figure out dialog. In addition to mumbling, the actors did something else I hate, which was to act their little hearts out. I don’t like to see the creaking machinery at work behind the story. That’s a common problem, incidentally, with movies based on plays and, while this movie was made for the screen, the writer is a British playwright. It shows. The whole thing is beyond artificial. Everything is played to some imaginary balcony, which is exhausting to watch.

The movie also lost me because all the white, non-little-people characters, whether McDormand’s character or the others, were played as bizarre, inbred, dysfunctional, low-life weirdos. This, my friends, is how Hollywood and British elites view America. I’m not saying that there aren’t people like that scattered throughout America (including Hollywood) as well as throughout Britain. I’m just saying there’s a peculiar venom to place them all in one American town.

But you know where the movie really lost me? It was 19 minutes into the movie when Sam Rockwell, playing an alcoholic, race-hating policeman who lives with his mother, drunkenly implied that another character named “Red” was a homosexual communist. I can’t find the dialog online, so I’m going off of memory here, but it went something like this:

Rockwell’s character (who’s bad) says Red’s lucky he doesn’t live in Cuba because in Cuba they kill homosexuals. Red’s response is two-fold: First, that Cuba’s human rights record is good for homosexuals and, second, that you have to go to Wyoming to see homosexual rights get violated. And that’s when the top of my skull blew off.

Let’s put aside the fact that Che Guevara loathed homosexuals and enjoyed killing them. He died a long time ago. It’s Cuba’s more recent record that should concern us — and Castro, after Che’s death, was just as virulent in his gay hatred:

“We would never come to believe that a homosexual could embody the conditions and requirements of conduct that would enable us to consider him a true revolutionary, a true communist militant,” Castro told an interviewer in 1965. “A deviation of that nature clashes with the concept we have of what a militant communist should be.”

In the eyes of Castro and his revolutionary comrade Che Guevara—who frequently referred to gay men as maricones, “faggots”—homosexuality was inherently counterrevolutionary, a bourgeois decadence. To a traditional Latin American machismo that viewed gayness pejoratively, they married an ideological fixation treating it as politically undesirable.

It wasn’t long after Castro came to power that police began rounding up gay men. In 1965, the regime established prison work camps known as Military Units to Aid Production (UMAP), into which it deposited homosexuals, Jehovah’s Witnesses, and other “undesirable” elements.

Though the Cuban regime closed down the UMAPs in the late 1960s, it continued to repress gay men as ideologically subversive elements. Openly homosexual people were prevented from joining the Communist Party and fired from their jobs. One of the country’s most distinguished writers, Reinaldo Arenas, recounted the prison experience he and countless other gay men endured in his memoir Before Night Falls. “It was a sweltering place without a bathroom,” he wrote. “Gays were not treated like human beings, they were treated like beasts. They were the last ones to come out for meals, so we saw them walk by, and the most insignificant incident was an excuse to beat them mercilessly.”

The regime has, in the past few years, tried to establish itself as gay friend, but this is “pinkwashing”:

Indeed, it tells you everything you need to know about contemporary Cuba that the country’s most visible LGBT activist is the straight daughter of Raul Castro. Mariela is a hard-core communist who skirts around her family’s horrific record of oppressing LGBT people, and her ersatz gay rights crusade reeks of being a vanity project and personality cult.

Three Billboards is obviously doing some of its own disgraceful pinkwashing.

The reference to Wyoming is also based on lies. It’s obviously meant to refer to Matthew Shepard’s horrific death. Shepard was the openly gay young man who was beaten to a pulp and tied to a fence post to die. The man who did it claimed that he killed Shepard because Shepard was gay. It was a terrible, vile crime, and the gay community and media instantly seized upon it to indict Wyoming and, indeed, all of America, as a hell hole of murderous homophobia. With a narrative in place, the media never bothered to dig even an inch deep into Shepard’s life to see whether the murderer’s confession rang true.

It took a gay journalist who wanted to write about Shepard’s martyrdom to get to the truth: The man who confessed to the murder had indeed killed Shepard, but he wasn’t a homophobe. He was Shepard’s part-time lover. The real problem in Wyoming wasn’t homophobia, it was methamphetamine. Shepard ran with a bad crowd and he died because of that crowd. If you haven’t read Stephen Jimenez’s excellent The Book of Matt: Hidden Truths About the Murder of Matthew Shepard

, I recommend it. It’s serious, sober journalism, which is a rare pleasure in this narrative-driven age.

For me, two big lies in 15 seconds — one that falsely savaged America while aggrandizing Cuban tyranny; and the other that falsely savaged Wyoming and America, while ignoring the victim’s terrible lifestyle choices — was too much. I could feel my blood pressure shoot up, and I headed upstairs for tea, chocolate, and some blogging. Life’s too short to waste on bad British/Hollywood propaganda. The only shame is that lots of Americans did watch the movie and that, while this 15 seconds of dishonest propaganda might have whipped by their conscious, it surely lodged in their subconscious. And that’s how people lose sight of truth.