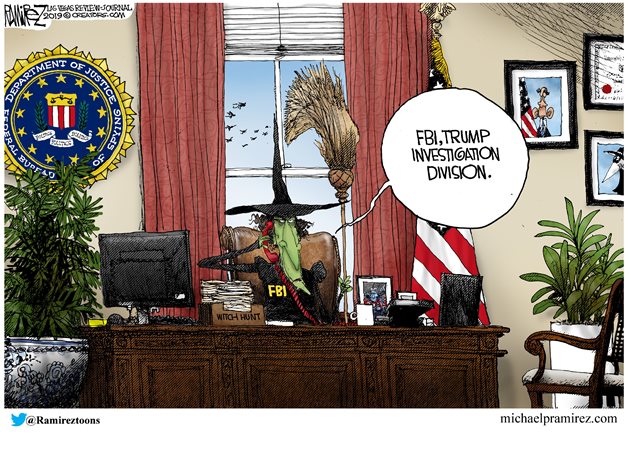 Proggie congresscritters claim to be shocked at charges about Obama administration “spying” on team Trump.  Given the public record, that is itself shocking. 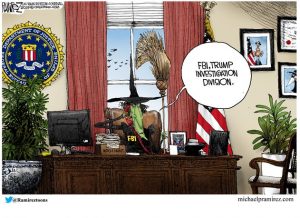 This from the Blaze (internal links omitted):

At a hearing before a Senate Appropriations subcommittee, Sen. Jeanne Shaheen (D-N.H.) asked Barr about a team he had indicated the day before that he was putting together to investigate the FBI’s handling of its Russia probe during the 2016 campaign, prior to the appointment of a special counsel. After President Donald Trump fired former FBI Director James Comey in 2017, former Deputy Attorney General Rod Rosenstein appointed special counsel Robert Mueller to head an independent investigation that would be separate “from the normal chain of command.”

Barr responded that he planned on “reviewing both the genesis and the conduct of intelligence activities directed against — at the Trump campaign during 2016.” He said he wanted to “pull together all the information from the various investigations that have gone on, including on the Hill, and in the department, and see if there are any remaining questions to be addressed.”

Shaheen asked Barr why he thought this was necessary.

It is shocking indeed that the left would try to defend the FBI, CIA and DOJ on the factually ludicrous claim that none of the agencies were involved in “spying” on Trump, whether before or after the November 2016 election.   The public record is replete with the facts that show they targeted Trump, his campaign and then his administration.

More specifically, we know of multiple FISA warrants on Carter Page.  We know of the investigation — and possible entrapment — of George Papadopoulos.  We know of the unlawful unmasking of Michael Flynn and the obscene full court press by the FBI and the DOJ to successfully destroy him.  We know of the constant leaks from the DOJ and the intelligence agencies to the press, including in the case of Flynn the leaking of information from top secret NSA intercepts.  We know of claims made by Brennan at Congressional Hearings that the CIA had developed evidence of Trump Russia collusion in 2016 wholly independent of the Steele Dossier, though we don’t know a scintilla of his claimed evidence.  We know that Comey passed information to a law professor to set up the Mueller investigation, but we do not know yet if that contained classified information.  And of course, we know that the FBI took up the Steele Dossier as the basis for an investigation.

How can anyone look at the facts in the public domain and still claim that the levers of government were not being used to target the Trump administration, whether lawfully or not, and whether one calls that by the name “spying” or not?

Eric Felten at Real Clear Investigations explains the game the progressives are playing:

The spying, which Barr vowed to investigate, is not the only significant possible violation of investigative rules and ethics committed by agents, lawyers, managers, and officials at the FBI and the Department of Justice. A catalogue of those abuses can be found in recently released testimony that ex-FBI official Edward William Priestap provided to Congress in a closed-door interview last summer.

From the end of 2015 to the end of 2018, Bill Priestap was assistant director of the FBI’s Counterintelligence Division, which meant he oversaw the FBI’s global counterintelligence efforts. In that role, he managed both of the bureau’s most politically sensitive investigations: the inquiry into Hillary Clinton’s handling of classified information and the probe into whether Donald Trump or his campaign conspired with Russia to steal the 2016 presidential election. His testimony provides rare insight into the attitudes and thoughts of officials who launched the Russia probe and the probe of Special Counsel Robert Mueller, whose final report is expected to be released very soon.

More important, his testimony contains extensive indications of wrongdoing, including that the FBI and DoJ targeted Trump and did so with information it made no effort to verify. It paints a portrait of the Obama-era bureau as one that was unconcerned with political interference in investigations and was willing to enlist the help of close foreign allies to bring down its target. And, perhaps presaging a defense to Barr’s claim that American officials had spied on the Trump campaign, it showcases the euphemisms that can be used to disguise “spying.” . . .

. . . Back on the record, Priestap presented what smacks of pre-approved testimony: “I’ve not heard of nor have I referred to FBI personnel or the people we engage with as – meaning who are working in assistance to us – as spies. We do evidence and intelligence collection in furtherance of our investigations.”

Shen was happy with the answer, and so she asked Priestap to confirm it: “So in your experience the FBI doesn’t use the term ‘spy’ in any of its investigative techniques?” Priestap assured her the word is never spoken by law-enforcement professionals – except, he said (wandering dangerously off-script), when referring to “foreign spies.”

“With that definition in mind, would the FBI internally ever describe themselves as spying on American citizens?”

This game of semantics is apparently at the heart of the Democrat’s claim that there was no “spying” on the Trump administration, and then by a leap of logic that could span the Grand Canyon, if there was no spying on Trump, then nothing the DOJ, FBI or CIA did regarding team Trump should be worthy of investigation as illegal. It is not just Sen. Sheehan, but all other proggie congresscritters as well:

Congressional Democrats are furious over Attorney General William Barr’s statement Wednesday that Donald Trump’s campaign was spied on, accusing the attorney general of mischaracterizing the FBI’s counterintelligence investigation in an effort to please President Donald Trump.

Barr’s comments are likely to ratchet up Democrats’ unease over the attorney general that’s already simmering over Barr’s role in the Mueller investigation and the decision there wasn’t sufficient evidence to prosecute obstruction of justice.

“I’m amazed that the AG would make that kind of statement, I think it’s in many ways disrespectful to the men and women who work in the DOJ, and it shows, I think, either a lack of understanding or willful ignorance on what goes into a counterintelligence investigation,” Virginia Sen. Mark Warner, the top Democrat on the Senate Intelligence Committee, told CNN.

“He almost seems to be endorsing one of these theories that has been debunked time and time again by the various, even House Republican-led, investigations trying to show some kind of resentment,” Warner added.

House Speaker Nancy Pelosi said of Barr’s testimony that he was “going off the rails. He is the Attorney General of the United States, not the attorney general of Donald Trump,” she said. . . .

Truly, screw these traitorous scum.  If you think back to the last time we had the levers of government misused by the Executive, it was Watergate.  And indeed, Watergate became a cause celebre because both Democrats and Republicans refused to countenance turning the law enforcement and investigative agencies of government into tools of partisan politics.

We’re a long way from Watergate, and our “power at any cost” Democrats are shamelessly demonstrating that they could care less about abuse of power, so long as it is in their favor.   Bullshit.

If there is any chance of this country surviving as a Constitutional Republic, it will only be if rule of law extends to everyone and even the thought of using the law enforcement and investigative agencies of government as tools of partisan politics is rejected out of hand.

The evidence suggests that Hillary tried to set up Trump for an October surprise with the ludicrous Steele Dossier that Fusion GPS duly provided to the FBI.   Fusion GPS briefed Mother Jones and Yahoo News on the Steele Dossier prior to the November 2016 election, and both ran stories stating some of the claims therein, noting that they were the subject of an ongoing FBI investigation.   The real October surprise, though, was that this illegal political dirty trick (for filing a false report with the FBI is illegal) did not swing the election to Hillary.

After the election, the Russia collusion story became the basis for a second bite at the apple — a soft coup orchestrated by the people in the DOJ, CIA and FBI who acted lawlessly prior to the election, not merely in trying to use the October surprise to down Trump, but also to protect those in on the lawless whitewash of Hillary Clinton’s multiple violations of the law regarding security of classified information.  It was a soft coup virtually every proggie in government and the media gleefully embraced.  Unfortunately for them, generating an investigation of Trump on almost certainly bogus — and thus unlawful — grounds to fish for evidence of a crime — any crime — worthy of impeachment came up empty.  Apparently, they should have dug up Lavrentiy Beria to do the investigation.

It is axiomatic that, if you are going to attack the monarch in a bid for power, you need to kill him, else you will face retribution.  In the instant case, retribution is not what we need, but fairly investigating and then, if warranted, enforcing the rule of law is long overdue, richly deserved, and absolutely necessary if this country is to survive. And any proggie who tries to stand in the way of that investigation needs to pay a stiff price indeed.

**  The cartoon at the top of the post was composed by Michael Ramirez and appeared at Townhall.com