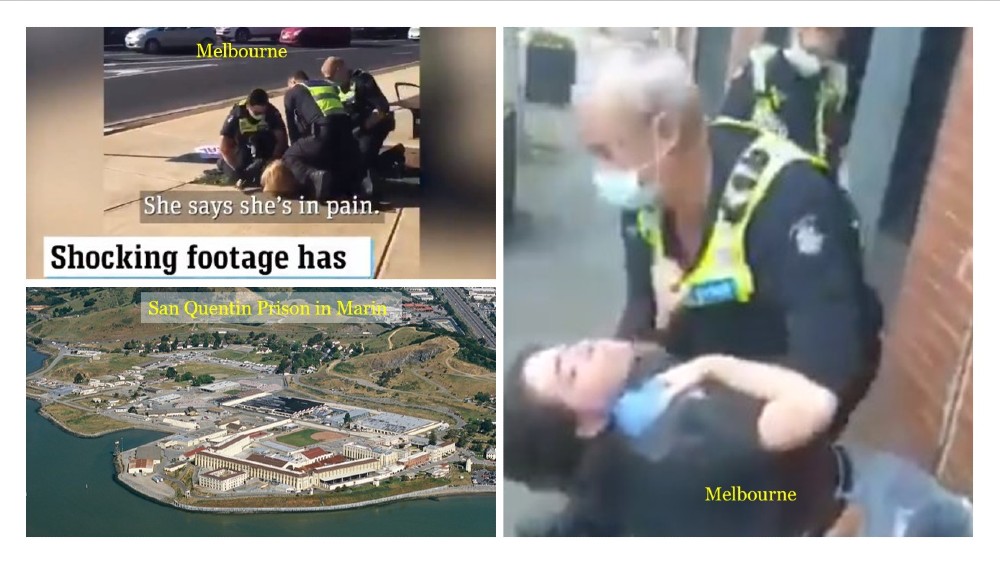 A polite letter from police in Marin County had a sting at the end that seemed the first step in the journey to Melbourne’s new police state.

In terms of miles, the distance between Marin County and Brisbane, Australia, is 7,869 miles (or 12,663.93 km for those doing the meter thing). But I’m not talking about traveling between the two places. Instead, I’m wondering how long it takes to go from Marin’s police action against its citizens to Melbourne’s police actions against its citizens.

Here’s the nice, polite message that the police in one part of Marin County sent to residents (emphasis mine):

Central Marin Police will conduct a focused Health Order Compliance operation next week that is intended to both remind and ensure that individuals are complying with the state and county Public Health Orders. Throughout the day on Tuesday, August 18th officers will be on foot in downtown San Anselmo, downtown Larkspur, and in Corte Madera’s shopping centers. They will be contacting individuals who are not in compliance and taking enforcement action as appropriate.

The purpose of this focused effort is to ensure the safety of everyone in our communities and to reduce the spread of COVID-19 through the proper use of face coverings and physical distancing.

Visit https://coronavirus.marinhhs.org for the most current Public Health Order information.

“Enforcement action as appropriate….” Those are rather chilling words. Keep in mind, as always, that the point of the lockdown, way back in March was simply “to flatten the curve” — that is, to slow the spread of the disease so that hospitals could have a chance to get their ducks in a row and not be inundated. That’s worked. Even in New York City, where Cuomo’s and de Blasio’s appalling responses led to one of the highest death rates in the Western world, the hospitals weren’t overwhelmed. (And all the support that President Trump sent, in terms of ships, beds, and ventilators, went unused.)

Somewhere along the line, though, making sure the medical system could cope morphed into “we will keep you prisoners of the state forever, with the Wuhan virus as our justification.” Look at New Zealand. All the lefties trumpeted it as the perfect example of how a lockdown with a cooperative citizenry could work perfectly to create a disease-free island. But once your government sets “disease-free” as its goal, you are its prisoners. I suspect that smug New Zealanders, proud of how their cooperation made the first place free of the Wuhan virus, are feeling now: New Zealand shut down all over again because of four new cases. And meanwhile, the prime minister seems to be eying Putin’s and Erdogan’s longevity in office by announcing she will probably delay elections.

But what’s all this got to do with Melbourne? Well, look at that slightly, politely threatening letter in Marin. And now look at police enforcement in Melbourne:

To give you a more visceral feel of how Melbourne is “fighting the virus” (or, more accurately, subduing its citizenry), here are a few videos:

Dramatic footage of a Melbourne woman being arrested for allegedly breaching COVID rules has surfaced online. In the video, her daughter can be heard screaming “she’s in pain” before arguing with police.

This could happen here. Melbourne police are clearly using the 1984 Orwell playbook for inspiration. Deeply disturbing and possibly a turning point. Surely even some of the New Normalists will finds this hard to stomach.
pic.twitter.com/egLpM1HBnr

My brother sent me this photo yesterday of a checkpoint he had to go through in Melbourne to make sure he had a WORK PERMIT to leave his house.

Police and army there.

He was stressing because his permit had an error on it and he didn’t know what the consequences would be. pic.twitter.com/NeXLhBksB4

So while it’s several thousand miles between Marin County and Melbourne, I wonder how much time it is before Marin’s politely “enforcement action as appropriate” becomes Melbourne’s police state — all because of a virus that Stockholm, Sweden, rode out with pretty much the same death rate as everyone else, but it’s citizen’s rights intact.