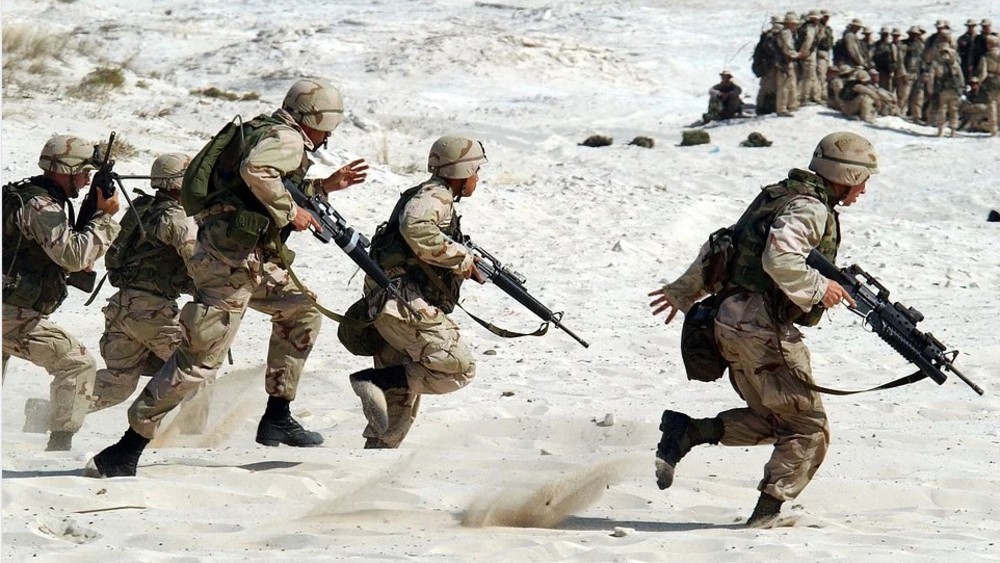 The Democrats have played a long game and are confident that, when they begin their openly planned coup, the military will support them.

Michael Anton’s essay is framed as a question: “The Coming Coup?” In fact, Anton proves that the planned coup is already in play. Unlike the ordinary conspiracy theory that requires a wild-eyed, paranoid person to connect imaginary dots to create invisible lines, with wildly disparate facts forced together into an impossible scenario, Anton simply points to the Democrats’ own words:

Over the summer a story was deliberately leaked to the press of a meeting at which 100 Democratic grandees, anti-Trump former Republicans, and other ruling class apparatchiks got together (on George Soros’s dime) to “game out” various outcomes of the 2020 election. One such outcome was a clear Trump win. In that eventuality, former Bill Clinton White House Chief of Staff John Podesta, playing Biden, refused to concede, pressured states that Trump won to send Democrats to the formal Electoral College vote, and trusted that the military would take care of the rest.

The leaked report from the exercise darkly concluded that “technocratic solutions, courts, and reliance on elites observing norms are not the answer here,” promising that what would follow the November election would be “a street fight, not a legal battle.”

Let me repeat what might have been lost on you: One of the scenarios was a “clear Trump win.” That is, the Democrats are not talking about making an uproar if there’s a repeat of the 2000 election when one state (Florida) had a narrow victory for Bush. Instead, the Democrats are saying that if Trump has a repeat of Nixon’s 49-state sweep, they’re going to take to the street.

What you really need to pay attention to in the above plan is how important the military is to this plan. As you see, the Democrats assume that “the military would take care of the rest.” Anton talks about retired military officers who are all on board:

It started with the military brass quietly indicating that the troops should not follow a presidential order. They were bolstered by many former generals—including President Trump’s own first Secretary of Defense—who stated openly what the brass would only hint at. Then, as nationwide riots really got rolling in early June, the sitting Secretary of Defense himself all but publicly told the president not to invoke the Insurrection Act. His implicit message was: “Mr. President, don’t tell us to do that, because we won’t, and you know what happens after that.”

The problem with the upper brass isn’t new. I already wrote last fall about the way Obama seeded the Pentagon with Deep Staters who have more reverence for permanent power than they do for the Constitution. After all, Trump, by making peace in the Middle East and in the Balkans, and by refusing to engage in wars that don’t directly benefit America, is a threat to these officers — and that’s despite the fact the Trump has built up the military like crazy. Once the military’s built up, the retired officers no longer have well-paid sinecures in the military-industrial complex and the active-duty officers have fewer opportunities for promotion. For them, Trump’s a career killer.

By the way, just so you know that my post touched a nerve, let me interject something here. My post on that point has a fairly unique descriptive title that spells out the premise: “Under Obama, there came to be a cancer in the Pentagon.”  That ought to be easy enough to find . . . but it’s not.

Even though my blog is no Breitbart, which Google routinely censors, the people or algorithms at Google took note of my post and buried it — and as of this writing, I can prove it. Go to Google and run this search: “Under Obama, there came to be a cancer in the Pentagon site:bookwormroom.com”.

If you’re like me, Google returns five pages of responses, none of which list that post — and that’s despite providing Google with both the website and the name of the article. At the end of the 5th page, Google coyly provides this message:

Your search – Under Obama, there came to be a cancer in the Pentagon site:bookwormroom.com – did not match any documents.

In order to show you the most relevant results, we have omitted some entries very similar to the 40 already displayed.
If you like, you can repeat the search with the omitted results included.

And you know what happens when you “repeat the search with the omitted results”? You still get bupkes — nothing. Don’t take my word for it. Here’s the search:

Site_bookwormroom.com Under Obama, There Came to Be a Cancer in the Pentagon – Google Search by Sunny Bookie Berman on Scribd

To provide a control test and prove that I’m not paranoid, go to Bing and search for “under Obama there came to be a cancer in the Pentagon.” My post pops right up as the first item:

The mere fact that Google is censoring me, a fairly undistinguished blogger, tells you that my post is right over the target.

So both Michael Anton and I are on the same page: The Pentagon has a core of corrupt high-level officers, both current and retired, who will not honor an Electoral College result. That’s scary enough but there’s more.

The other sign that the Democrats are preparing a coup involving military cooperation is the Jeffrey Goldberg Atlantic article that accuses Trump if disrespecting the military. The obvious purpose behind the article is to suppress the pro-Trump military vote. The secondary, and more important purpose, is to tell the troops that, once the coup starts, they shouldn’t support Trump because he does not support them.

That’s it. That’s the whole reason for anonymous statements that bear no resemblance to Trump’s excessive concern for the military, whether it’s funding it, blowing up Soleimani, withdrawing troops from war zones, or generally treating the military with open love and respect.

Some of us might say, “No, the military will never fall for that hoax,” but I’m not so sure. A Military Times poll from the end of August purports to show that the troops prefer Biden. On this surface, this is bizarre. Biden, after all, was at Obama’s right hand when the Obama administration gutted the military, threw the troops into pointless military operations, never bothered to take out terrorists like Qassem Soleimani, and abandoned former military people in Benghazi. Obama’s also the man who memorably said that our troops callously air raid villages, killing civilians.

Then again, remember what else Obama and Biden did during their eight years: They turned the military into a social justice experiment, that went far beyond ending Don’t Ask, Don’t Tell and, instead, allowing gay troops to serve openly. In the new order, the military starting celebrating and elevating people like “Harpy Daniels“:

Years before he became a yeoman 3rd class in the United States Navy, Joshua Kelley was entertaining exuberant crowds under his drag name, “Harpy Daniels.”

The 24-year-old Berwick, Pennsylvania native, who currently serves as an administrative supervisor aboard the forward-deployed aircraft carrier Ronald Reagan, brought Harpy along for the ride when he decided to join the Navy in February 2016, a choice he said was heavily inspired by his father.

Now, despite the furious operational tempo the Navy demands of its personnel, Kelley manages to find time to perform as Harpy Daniels on ship during MWR-sanctioned events designed to boost morale and provide sailors a much-needed break from daily burdens. He even took home a $1,000 Navy Exchange card for a second place finish in a recent lip sync competition.

Within his first year in the Navy, Kelley was voted to be the president of Strike Fighter Squadron 115′s Coalition of Sailors Against Destructive Decisions, became the public affairs officer for the carrier Reagan’s Gay, Lesbian and Supporting Sailors association, was named VFA-115′s Blue Jacket of the Year and earned his first Navy-Marine Corps Achievement Medal, a Navy release said.

Sure, the Navy’s always had a reputation for “rum, sodomy, and the lash,” but gay drag queen performers is carrying things a bit too far.

Another example of the effect Obama and Biden had on the military was the cross-dressing exercises at  Arizona State’s Army ROTC during the Obama-Biden years:

Blisters, sweat and perhaps a little bit of blood was the sight at the Sun Devil Fitness Complex on Monday, when the men and women of ASU Army ROTC braved the Arizona heat to run in fabulous (and some not-so-fabulous) heels to raise awareness of sexual assault.

On Monday afternoon, ASU Army ROTC program hosted the event, “Walk a Mile in Her Shoes,” which consisted of students in the ROTC program wearing heels and running 1.26 miles as part of Sexual Assault Awareness Month.

When ASU Army ROTC decided to hold an event for Sexual Assault Awareness Month, it realized walking a mile in high heels would bring school-wide attention to such an important issue, ROTC Cdt./Corporal Alexis Johnson said.

“The purpose of the event is to create a basis of understanding about sexual violence, stigmas and rape culture in the military as well as in our community and to reinforce standards of behavior, active bystander mentality and to be peer advisers to one’s unit and community,” Johnson said. “By walking in heels, the hope is to instill standards of behavior that will resonate.”

I’m thinking that there might be ways other to make that point than to have the ROTC cadets cross dress.

And let’s not forget that the military, just like other parts of the permanent Deep State, told its troops that MAGA stands for white supremacy. The rot runs very deep. Who cares about destroying unit cohesion by pitting against each other the different races within a remarkably well-segregated military? It’s more important to defeat Trump.

So are the military polls favoring Biden real or not? Who knows? There are undoubtedly more leftists in the military than there were before. Also, given that the military’s claiming that supporting Trump is a sign of white supremacy, those troops who do support Trump probably wisely keep their mouths shut.

The point of this whole post is to get you very worried about what has happened to the American military since 2008. Obama and Biden had eight years to change it into an organization that, at the top, wants to continue to fight wars to keep their careers going — something Trump’s extraordinary diplomatic skills are ruining — and, at the bottom, has young people who have been marinated in identity politics, LGBTQ theory, and critical race theory.  Trump may have had minimal sway over the upper ranks because his policies are killing their jobs and he may have minimal sway over the lower ranks because the ideological corruption runs too deep.

Be afraid. Be very afraid.

UPDATE: I wondered if anything had changed at Google since I wrote this post. On September 11, I again ran the search naming my website and the post. Google returned posts in which I mentioned my “Cancer in the Pentagon” article but did not return the actual post:

_Under Obama, There Came to Be a Cancer in the Pentagon_ Site_bookwormroom.com – Google Search by Sunny Bookie Berman on Scribd