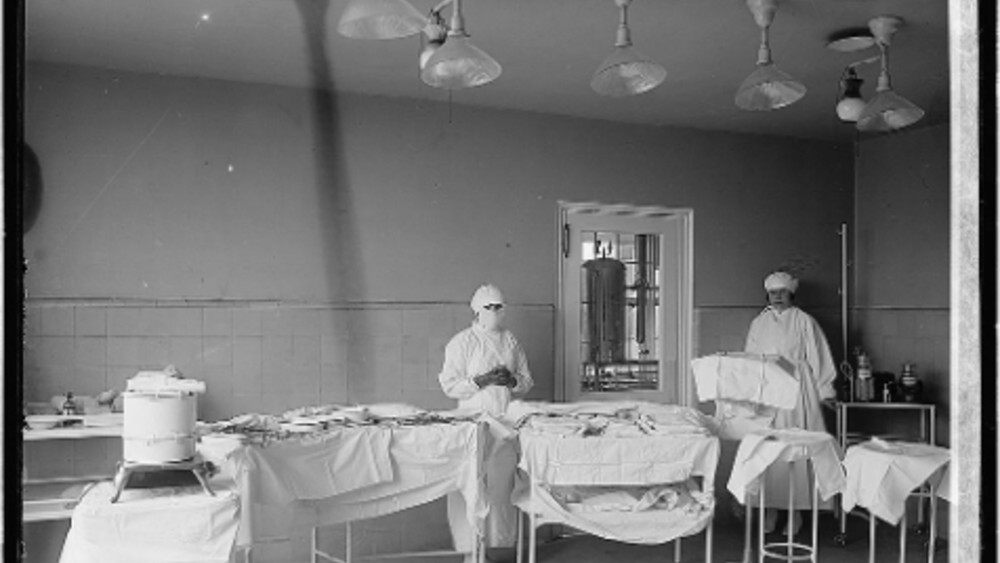 When I read the allegation that an ICE physician was doing unusual numbers of hysterectomies, my mind when to dark places.

I neither believe nor disbelieve this story reported at Fox New:

A nurse at a Georgia prison sounded the alarm about the number of hysterectomies performed on migrant women detained by Immigration and Customs Enforcement (ICE) in a whistleblower’s complaint filed Monday to the Department of Homeland Security.

Dawn Wooten, a licensed practical nurse, expressed concern regarding the “high numbers” of detained immigrant women held at the Irwin County Detention Center (ICDC) in Ocilla, Ga., receiving hysterectomies, as well as other “dangerously unhealthy practices” at the prison amid the coronavirus pandemic, according to the complaint filed Monday by Project South, an Atlanta-based non-profit, and the Government Accountability Project to the Department of Homeland Security Office of Inspector General.

Wooten, who worked full-time at the detention center until July, when she was demoted to work as needed, said she and other nurses questioned among themselves why one unnamed gynecologist outside the facility was performing so many hysterectomies on detainees referred to him for additional medical treatment.

“We’ve questioned among ourselves like goodness he’s taking everybody’s stuff out,” Wooten said, according to the complaint. “That’s his specialty, he’s the uterus collector.

“Everybody he sees has a hysterectomy—just about everybody,” Wooten is quoted as saying in the complaint, referring to the unidentified doctor, adding that he, in one incident, even accidentally removed the wrong ovary on a detained migrant woman.

The reason I’m agnostic is that there are no facts yet. There’s just this accusation. ICE is investigating the accusation and I’ll take more notice when there is more data.

Having said that I wanted to comment upon how differently my mind works from other people’s, which is maybe a bad thing or maybe a good thing.

Rick Moran covered the story at PJ Media. After stating the known facts, limited as they are, he discussed the reasons the physician, assuming he was doing an unusually high number of hysterectomies, might have engaged in that behavior. All of the reasons Rick advances make sense to explain the alleged behavior:

Is there a chance this story is true? Selling a uterus is not easy in the United States. Far more common are women who rent their uteruses to become a surrogate.

But harvesting a uterus for study or transplant — a rare and difficult procedure — has got to be worth something. Harvesting eggs will bring in $8,000 per egg. The same could be true of an intact uterus. It wouldn’t take many subjects to make quite a bit of money.

But it’s also possible the doctor in question — an outside physician not employed by DHS — was called in specifically to treat women at the facility with uterine problems. Those women may very well have had conditions necessitating the removal of the uterus. Wooten said almost every patient the doctor saw had a hysterectomy. This wouldn’t be unusual if the doctor’s practice was in treating women with diseased uteruses.

I agree with all of those suggestions. The only one, though, that also occurred to me was that the doctor might be a specialist in uterine issues. If that is his specialty, that’s what he would do — take out diseased uteruses.

It’s also possible that extremely poor women from third world environments can be disproportionately affected by uterine problems that one doesn’t see in America. Here, with better healthcare, perhaps we catch them early when they can be treated with hormones or with lesser surgeries than hysterectomies.

However, as I said, other than that shared idea, my mind went to different and much darker places.

I assumed that, if the allegations are true, the doctor was either making the women easier to use for sex trafficking or was practicing a form of eugenics.

When attractive Jewish women arrived at the concentration camps, the doctors would send them to the hospital and give them hysterectomies. The women would then be sent to brothels to service the camp guards and other visiting Nazis. The hysterectomies meant that they could not get pregnant and that their utility would not be limited by having periods. That’s why I thought, assuming the accusation was true, that the doctor might be prepping the more attractive women for sex trafficking.

The other thing I thought of was the way eugenicists in America (almost invariably progressives or Democrats) performed a disproportionate number of hysterectomies on black women. They did so intentionally, to try to limit black reproduction. Assuming the accusations against the doctor are true, he might have been an anti-immigration activist, or an anti-Hispanic racist, who was waging his own eugenic war against Hispanics or illegal immigration.

Oh, there’s one other thing I thought of: The doctor could be old. For a long time, doctors in America routinely performed hysterectomies on women in their late thirties and forties. My mom and all of her friends had hysterectomies in the 1960s and 1970s. As far as I know, none had cancer. It was just “done” when women hit a certain age. If this doctor is older and set in his ways, that could explain things.

I live in a dark place — and yet, for the most part, I’m a very happy person. Go figure.