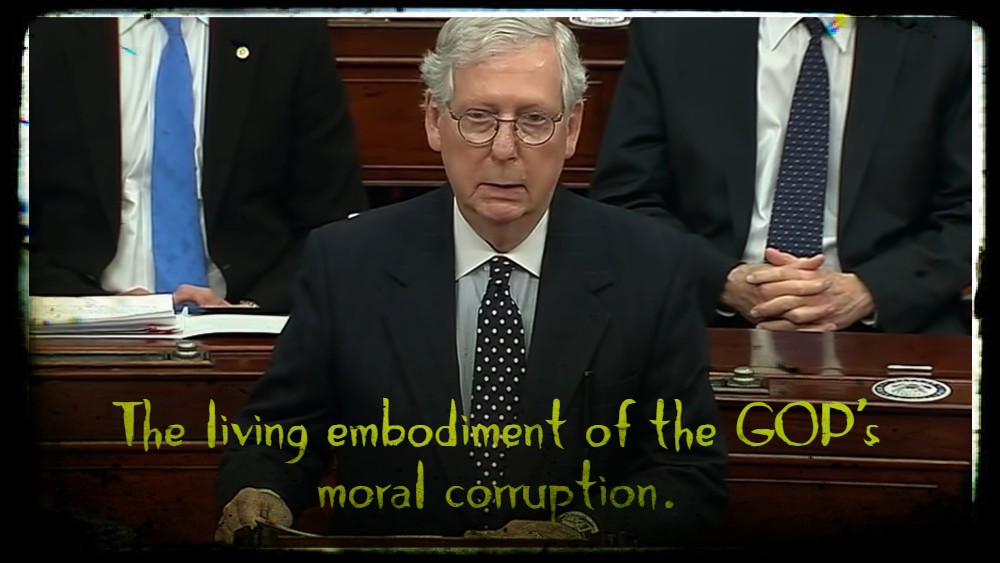 The GOP poohbahs’ belief that they can save the party by bowing before the ascendant left shows how disconnected they are from voters.

One thing that’s become clear in the past week is that the Republican party in Washington, D.C., is completely disconnected from the ordinary Americans that, of necessity, have looked to the GOP as their political home because it’s the “not-leftist” party. On the ground, outside of D.C., these reluctant GOP allies still support Trump. Whether, with Trump gone, they will support the GOP is a good question.

Even as voters yearn for Trump, this is what’s happening in the Swamp:

Senator Mitch McConnell, the departing majority leader, privately told associates that he believed Trump had committed impeachable offenses and welcomed Democrats’ efforts to impeach him, thinking it could help the G.O.P. purge the president from its bloodstream. On the House side, Representative Kevin McCarthy, the minority leader, has decided not to lobby members of his party to vote against impeaching Trump.

Representative Liz Cheney, the No. 3 Republican in the House, announced yesterday that she would vote to impeach the president. In a statement, she said that the president bore the responsibility for the attack on the Capitol. “Everything that followed was his doing,” she said, later writing that there had “never been a greater betrayal by a president of the United States of his office and his oath to the Constitution.”

Or if you listened to Tucker Carlson last night, you got to hear Fox’s Brit Hume fulminate against Trump, assert that there was no election fraud, and crave the normalcy that impeaching Trump would bring. And Hume probably still wonders why Fox lost 40% of its audience after the election. I still watch Tucker because, while I won’t forgive him for pretending there’s no election fraud, he’s still one of the few people in America brave enough to speak out against the Left’s having recently elevated cancel culture from a university practice to a full-blown fascist political movement.

But back to those Republican Washington insiders who are determined to destroy Trump. My question is whether they have any idea who their constituents are? I don’t think so.

They want to go back to candidates like John McCain and Mitt “Philippe Pétain” Romney, both of whom lost and both of whom found it unforgivable that they were succeeded by a muscular conservative who actually won. They dream of a re-do of the Bush years, which were disastrous for America and especially for ordinary Americans — not the urban monsters academia created or the D.C. monsters that corrupt politics created. They fail to understand that American conservatives, after decades of being force-fed the political equivalent of styrofoam, in the form of a conservativism that was nothing more than leftism-lite, finally got real food.

For people who believe in the Constitution, the free market, and the rule of law (applied equally regardless of race, color, creed, or political ideology), Trump finally gave them the meat and drink of true conservativism. He fought for secure borders, he refused to send their children to die in wars that benefit only other countries (if that), he worked to end stifling regulations, he had the courage forge a new pathway to peace in the Middle East, he super-charged an economy that lifted the bottom half up, he supported the First and Second Amendments in both word and deed — and of course, that’s just the shortlist of Trump’s accomplishments. And Trump did this despite non-stop hysterical, faked attacks.

At the end of the day, Trump made the GOP look bad and the Republicans in D.C. hated him for it. They would have profited more from Hillary in the White House. Trump attacked their bank accounts, which were built on the ill-gotten proceeds from the Americans they relentlessly taxed and regulated. For that, he had to be destroyed. Aside from a few stalwarts, the real power players in the Republican party, preferred to reign in, or at least profit from, leftist Hell, than to serve in a constitutional Heaven.

In that regard, let us not forget the GOP’s unholy fealty to illegal immigration. It’s no surprise that the Chamber of Commerce, which supports impeachment, also supports destroying American workers by shipping their jobs to China and, if that’s not possible, filling America with illiterate, illegal immigrants, who can be exploited almost as badly as the Democrats’ slaves were before Republicans ended that immoral system.

In other words, the GOP doesn’t suck because it’s weak and feckless. It sucks because it’s corrupt and anti-American.

And now, the GOP poobahs think they can save themselves, and their wealth and power, by joining with the Democrats to impeach a president who leaves office in six days, and who still earns complete respect from those who voted him into office in the first place.

I’ve long believed it’s a mistake to start a new political party. There hasn’t been a successful one in America since 1856. I thought it was wiser simply to primary and co-opt that old party. However, I’m beginning to suspect that the GOP is too corrupt, too far gone into rigor mortis already, to save. Certainly, the conservatives and Trump supporters from whom I’m hearing will never again fund or vote for a party that turned on Trump.

Leftist corporations are defunding Trump-supporting politicians, a frightening sign of fascism, for what was Hitler but a socialist partnership between government and big corporations. However, the politicians who look longingly at corporations waving them cash if they promise to give up Trump and the political values he espoused, must understand that they have a choice: They can get money from corporations or they can get votes from citizens. They can’t do both.

The question for the GOP is whether it wants to keep those ten or keep its voters. Again, it can’t do both.