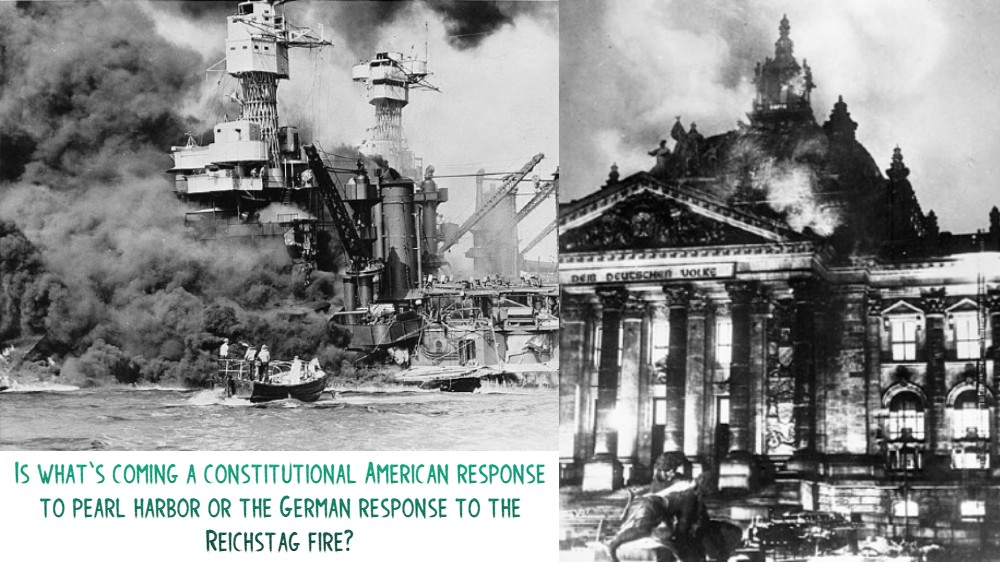 Will the FBI’s raid result in the constitutional version of America’s response to Pearl Harbor or the German response to the Reichstag fire?

The FBI’s raid on Mar-a-Lago is an outrageous violation of America’s political norms and a grotesque and undoubtedly unconstitutional fishing expedition. Lavrentiy Beria would be brought of how Merrick Garland’s DOJ and the House January 6 Committee have taken to heart his famous statement: “Show me the man and I’ll show you the crime.” Little things like due process and, again, political norms, are irrelevant.

I agree with Athena Thorne that the DOJ hasn’t gone this far to stop. Having raided Trump’s home and taken everything the FBI could load onto handcarts, the DOJ’s minions will be going through every document to find evidence of a crime — any crime — that can support an indictment. Trump will then be tried in a D.C. court with a D.C. judge likely refusing to transfer the case to a different venue. Then, he’ll be convicted. Trump can still run for and win the presidency but he’ll have a hard time campaigning. As far as I know, the last person to run for the presidency from prison was Eugene V. Debs, in 1920, who was, ironically enough, a socialist candidate.

That’s my prediction regarding Trump himself. What interests me here is the two paths Trump’s travails can take vis-a-vis the American people. I see those paths as Pearl Harbor or falling into a Reichstag fire trap.

In the years leading up to Pearl Harbor, America was an almost aggressively pacifist, non-interventionist nation. Americans had seen the havoc from WWI, which left almost 10,000,000 war dead, of whom more than 116,000 were American. Not only did Americans have no interest in war, but they were also especially disinterested in going back to Europe and, once again, pulling Europe’s chestnuts out of the fire.

Americans also couldn’t miss that WWI helped trigger Russia’s Bolshevik Revolution and contributed to the spread of Spanish Influenza, which killed 25,000,000 to 100,000,000 people around the world of whom around 675,000 Americans. (The broad spread for worldwide estimates is because there were large parts of the world in which deaths could only be extrapolated from other trends and data.)

Thanks to this attitude, the U.S. Military was a rag-tag organization, with the troops drilling using antiquated weapons and Congress refusing to upgrade anything — including building a real air force.

Meanwhile, by 1941, the Germans completely controlled the continent, England just barely repulsed the Germans in the Battle of Britain, and the Germans were successful along the Mediterranean. The Japanese, therefore, saw a path to seize the entire Malayan peninsula. They had already wreaked havoc in their own sphere, slaughtering hundreds of thousands in China. With Britain (Singapore, Malaya) and Holland (Batavia/Indonesia) sidelined by the Nazis, the only thing that stood between them and the Malayan Peninsula (with all its resources, especially rubber) was the United States, which controlled the Philippines.

The Japanese calculated that, if they knocked out the American Navy in one fell swoop, a pacifist, non-interventionist America without a functioning Navy was certain to cede the Philippines to Japan without a fight. It turned out that the Japanese had miscalculated badly.

Americans may have been pacifists as to what was happening in Europe, but they were utterly outraged and completely galvanized by the attack on Pearl Harbor. Again, I don’t need to detail the rest: Germany declared war on the U.S. immediately after Pearl Harbor, and America instantly transformed into a mega-war machine that poured troops into battle and created an entire arsenal of democracy. By August 1945, after tremendous sacrifices of blood and gold, America really was the last nation standing. The way was paved for the Pax Americana.

With that in mind, one way to imagine the fallout from the raid is that Americans will become so outraged that they will finally throw the bums — in this case, the Democrats — out of politics. Not just in 2022 but also in 2024, the Red Wave at ballot boxes across America will be overwhelming, with Americans voting at rates that make cheating impossible. Likewise, they will take on every school board, challenge every dumb town council, defund colleges and universities, and generally find their backbone and the Constitution at the same time. That would be a lovely result.

Trump will be back in the White House, whether he’s languishing in prison or not. Once there, the Dems will long for those mean tweets. Instead, he’ll use the full force of his executive power to bring the administrative state to heel, prosecuting the criminals and firing the fifth column people. In that, he’ll be helped by a huge conservative majority in Congress. Federal spending will be severely limited, taxes cut, the Department of Education shut down, and hosannas will ring out across America.

That’s the dream outcome flowing from a terrible miscalculation on the Dems’ part. But are the Democrats stupid enough to trigger that? Well, here’s the alternative view.

When the Reichstag burned down, the Nazis blamed their political opposition and used that blame to destroy the opposition. Even at the time, many suspected that the Nazis had set the fire to justify destroying the opposition but we’ll never know. What matters is that they cleared the way for a complete totalitarian takeover and everything that followed.

I’m worried that, just as the Reichstag fire was the setup for the Nazis to act, the Mar-a-Lago raid is the Biden administration’s match, with hot-headed conservative responses as the fire. Indeed, the set-up is already in place:

Americans angry about the FBI raid on Donald Trump’s Florida estate and insecurity at the southern border pose an increased risk of domestic terrorism, the Biden administration warned in a series of bulletins sent to federal and local law enforcement over the weekend.

The warnings from the Justice Department, the Homeland Security Department, the FBI and Customs and Border Protection used nearly identical language and were issued after one man tried to attack an FBI office in Cincinnati and a driver crashed into a barrier with his car on fire at the U.S. Capitol before committing suicide.

“Last night, the Department of Homeland Security and the Department of Justice issued a Joint Intelligence Bulletin, accessible via the Homeland Security Information Network, providing information on the potential for domestic violent extremists to carry out attacks on federal, state, and local law enforcement and government personnel or facilities,” CBP Commissioner Chris Magnus wrote in a memo to 60,000 employees.

The warnings were being “shared in light of an increase in threats and acts of violence, including armed encounters, against law enforcement, judiciary, and government personnel, in reaction to the FBI’s recent execution of a court authorized search warrant in Palm Beach, Florida,” Magnus wrote. “Since the search, the FBI and DHS have observed an increase in violent threats posted on social media against federal officials and facilities.”

A few more hot heads and the Biden administration is primed to use its “emergency powers” to shut down the midterm elections. If there are a few protests that get out of hand or more ugly threats, the Democrats might even use martial law to “gain control of the situation.”

Those conservatives who think the U.S. military could never turn against the United States or that the Posse Comitatas Act completely prevents the U.S. military from operating on American soil, need to think again. Regarding the Act, Congress has the power to allow the military to operate on American soil. And then there’s the military’s allegiance. It’s not your Daddy’s military anymore.

As I once explained, Obama already started to convert the military from a constitutional military to a Democrat party military. The fact that the military repeatedly ignored Trump’s orders tells you everything you need to know about the Pentagon in 2022.

The Pentagon ignored his climate change orders, his Syria orders, and his orders to protect D.C. on January 6. And yes, after the Pentagon ignored his climate change orders, Trump should have fired every last person involved, but he was (a) naive and (b) already being swept under by the Russia hoax. Regardless of Trump’s response, the Pentagon is now an arm of the Democrat party, rather than a nonpartisan, constitutional military.

Nor can one look to the troops for help. Again, thanks to Obama, Biden, and the military’s refusal to abide by Trump’s executive orders, the military has effectively had 14 years to implement both critical race and transgender theories.  Overall, thanks to Afghanistan (and we’re at the anniversary of America’s disastrous withdrawal) and the military’s obsessive focus on the LGBTQ+++  cadre and on creating racial division, Americans no longer trust our military — and they’re probably right not to do so. No wonder conservative young men and women, who made up the backbone of the American military, are no longer enlisting. The U.S. Military is a hostile environment.

The Democrats aren’t stupid. They know that raiding Mar-a-Lago is a match to tinder. It’s entirely possible that they’re so monomaniacal they don’t care. But I think it’s more likely that they’re looking forward to the response because that purposefully triggered response will be their version of the Reichstag fire, justifying crackdowns that end, once and for all, the American experiment.