The Taliban has hit Marin County (indirectly).  Marin County is headquarters for Roots of Peace, an admirable charity that seeks to advance agricultural development in poverty-stricken areas.  It has an outpost in Afghanistan, where it seeks to enable the Afghani people to feed themselves.  The Taliban can’t have that kind of thing happening in its country.  It therefore sent off some foot soldiers to attack the Roots of Peace Kabul office, killing a child in the process.  If radical Islam had a cable-TV station, it’s motto would be “All war, all the time.”  One wonders if this will be a bit of reality that mugs that peaceniks who are so self-centered that they cannot envision cultures that have, as their core value, a desire for perpetual warfare.

David Clarke, Milwaukee’s Sheriff, made a splash when he encouraged Milwaukee’s beleaguered citizens to arm themselves: 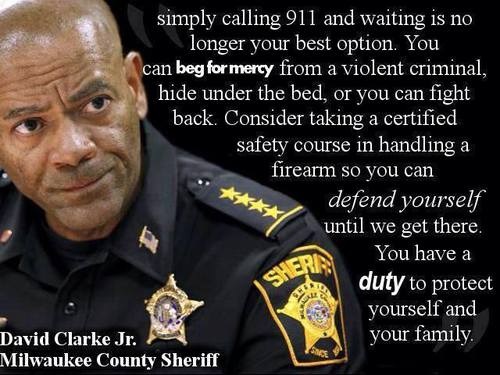 I think Clarke may have found a kindred spirit in Detroit Police Chief James Craig. During a press conference in which he discussed the rising numbers of homeowners (successfully) using arms to defend themselves, he had this to say:

Detroit Police Chief James Craig said at a press conference last week that in his 37-year career, he’s never seen as many homeowners defending themselves by shooting intruders. Craig told The News in January he felt the crime rate could be lowered if more “good Americans” were armed, because he said criminals would think twice about attacking.

I also want more of this:  An Ebony magazine editor went on a rant against conservative blacks; got called on it; claimed that the person calling her out was a white racist; when she learned that the person calling her out was black apologized for calling him white; and then doubled down on rants that were both anti-conservative black and anti-white.  (That’s not want I want to see more of.  It’s this next thing I like.)  Normally, Republicans would run away screaming from this type of confrontation, leaving the racist Leftist in control of the field.  This time, the RNC demanded an apology . . . and got it.

Speaking of the Left’s racial obsessions:  Any half-sentient being knows that Stephen Colbert’s shtick is that he created a faux-conservative character who is pathologically dumb, racist, sexist, etc., and that Colbert, a marginally-talented generic Leftist, uses this character to claim that all conservatives are pathologically dumb, racist, sexist, etc.  That’s why it’s hysterically funny that, when his show tried to  highlight (non-existent) Republican racism by having his character ostensibly tweet out a crude anti-Asian stereotype, the Asian community got riled and demanded that Colbert be fired for being an anti-Asian racist.  Asians should stop getting their knickers in a twist about stupid TV shows and should start looking at where their real politic interests lie.  (Hint:  It’s not the Democrat Party.)

Leland Yee has been around forever as a fixture in Bay Area politics.  As his name implies, he’s Asian, he’s hard Left, and he represents San Francisco and parts of San Mateo in the California legislature.  Since Sandy Hook, Yee’s been very vocal about being anti-guns.  He also just got indicted for gun running, including trying to sell arms to Islamist groups.  The MSM has been trying hard to ignore his story, as it’s been trying hard to ignore a bunch of other stories about spectacularly corrupt Democrat figures.  Howie Carr therefore serves a useful public service when he calls out the media, the Democrat party, and the crooks.

Speaking of crooks, Harry Reid claims never to have called Republicans liars when it comes to Obamacare, despite footage of him calling Republicans liars because of Obamacare.  There’s some debate on the Right about whether Reid’s gone senile or is just trying out his version of The Big Lie.  My theory is that we’re seeing malignant narcissism in play.  As I’ve said a zillion times before in speaking about Obama, malignant narcissists never “lie” because their needs of the moment always dictate the truth of the moment.  That is, if they need to say it, it must be true.  (It’s nice to be your own God.)

Keith Koffler identifies the four roots of Obama’s disastrous foreign policy.  I agree with him, although I would add a fifth, which is that Obama desperately wants to see America knocked down to size as punishment for her myriad sins.  Perhaps Obama should read the DiploMad, as he explains why Russia, the country before which Obama is now weakly doing obeisance, has always been much worse than America could ever be, both as a protector and an enemy.

Adm. Jeremiah Denton, Jr. has died at 89.  The public learned about Denton during the Vietnam War when, during one of the forced confessions that the North Vietnamese liked to televise to the world, he blinked out a Morse code message — “T-O-R-T-U-R-E” — thereby providing the first proof America had that the Commies were torturing American POWs.  During the same interview, he bravely said he supported his country, a statement that led to more torture.  Denton was also America’s longest-held POW, spending almost 8 years in the Hell that was the Hanoi Hilton, and various related prisons.  During that entire time, he was brutally and repeatedly tortured and he spent four years in solitary confinement (where he was tortured).  My heart bleeds when I read what happened to him.  But Denton came home and he got on with a full, rich life, including six years in the U.S. Senate.  If anyone deserves to Rest In Peace, it is Adm. Denton.

I don’t think much of Stanford.  It’s nothing personal.  I think all the big universities (and most of the small ones) have become intellectually corrupt.  However, Prof. Michael McConnell, at Stanford Law School, has somewhat restored my faith in Stanford by writing one of the clearest analyses I’ve yet seen of the problems facing the government in the Hobby Lobby case.  Of course, law and logic will not sway Ginsberg, Kagan, Sotomayor, and Breyer, all of whom are activists much more concerned with making policy than with applying law.  As happens too often, Anthony Kennedy will cast the deciding vote — a reality that places way too much power in the hands of a man who seems too often to blow, not where the Constitution takes him, but wherever his fancy for the day alights.