Anti-Semitism in the Democrat party represents a pragmatic confluence of socialism, African-American anti-Semitism, and Islamic anti-Semitism. 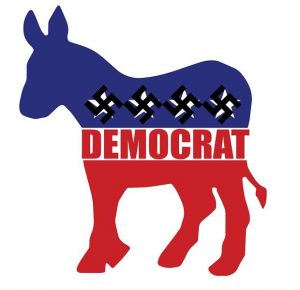 My sister, who is fairly apolitical, asked me why the Democrat Party is becoming openly anti-Semitic. I’ll give you the same primer I gave her:

Antisemitism is baked into the socialist cake because (a) Karl Marx, who come from a family of converts, was a self-loathing Jew and (b) Marx’s writings permanently connected Jews with the capitalism that socialism seeks to overthrow. It did not matter to him that the vast majority of the world’s Jews were not capitalists. There were visible Jewish capitalists and that was sufficient.

Antisemitism is also baked into the socialist cake because socialism is all about collectivism, not about the individual. The Bible, however, is about individualism: Each human is important because each is made in God’s image. That viewpoint is the antithesis of collectivism. That’s another reason to hate both Jews, who are the people of the book and started the whole Bible thing, as well as to hate Christians.

The Democrat party started as a racist party. It has always been about race. No matter the political winds, it obsesses about race. It just substitutes different races at different times for liking and loathing.

The Democrat party, first under Wilson and then with increasing enthusiasm under FDR, became a socialist party. Initially, though, it was a soft socialism, one that did not affect the ordinary voter’s deep love for America. This was a soft socialism that promised, not to destroy America, but to speed the working classes’ assimilation into the American dream.

The Democrat party learned to “love” Jews in during the 20th century because Jews associated the Democrats with (a) beating the genocidal Nazis and (b) recognizing the state of Israel. In the 20th century, this Jewish fealty still mattered to Democrat victories in key states.

Jewish allegiance to the Democrat Party became locked in from the 1960s forward because Jews almost always go on to higher education. As we know, colleges and universities since the 1960s have been staffed almost entirely by Democrats at both the administrative and faculty levels. Moreover, these colleges and universities have become petri dishes for increasingly radical socialism, always under the umbrella of the Democrat party. As a result, Jews will vote for Democrats even if the Democrats go full bore national socialism and march them into the gas chambers. For a smart people, Jews are appallingly stupid.

Blacks became wedded to the Democrat party — the party of slavery — thanks to Roosevelt’s New Deal, which gave them money during the Depression.

Sadly, Blacks are more anti-Semitic than any other Americans except for Muslims, something Jews can never understand because Jews have always fought for black quality. Old Baby Boomers will go to their graves boasting about how they went down South in the 1960s to fight with blacks against Jim Crow. Jews also remember that the great Martin Luther King supported both Jews and Israel.

Black anti-Semitism arises from a combination of things: (a) the historic association blacks see, rightly or wrongly, between slumlords and Jews; (b) Farrakhan’s deeply anti-Semitic Nation of Islam; and, last and most importantly, (c) the hard Leftism that is becoming embedded in blacks (especially college educated blacks who are corporate, political, and community leaders).

(Note: I hope no one takes what I’m saying as a racist screed against blacks because it’s not. It is, instead, an analysis about black political loyalty and its recognized anti-Semitism.)

Unlike Jews, blacks are becoming disenchanted with the Democrat party, the policies of which have consigned generations of blacks to poverty and dysfunction. Blacks who understand that socialism is behind the troubles have become conservatives. They are a very small number, incredibly brave, and I admire them greatly. The rest of those blacks disenchanted with the Democrat party are doubling down on even harder socialism.

The Democrat party is also actively reaching out to Islam. Because Muslim voters are not yet a significant American demographic, the Democrat party seems to be operating on the principle that “the enemy of my enemy is my friend.” Both socialists and Muslims are hostile to (a) America, (b) Israel, and (c) believing Christians and Jews. Socialists and Muslims each assume that, once they’ve destroyed America, Israel, and believing Christians and Jews, they will prevail against their opposite number: That is, socialists believe they’ll subsume Muslims and Muslims believe they’ll subsume socialists. Also, Muslim women, notwithstanding Planned Parenthood, have lots of babies.

The psychological need to ally with Islam means that the Democrat party must buy into Islam’s pathological, genocidal hatred for Israel, the world’s only Jewish nation. While Muslims who have always been as open about their doctrinally-mandated hatred for Jews as they have been in their hatred for the Jewish state, Democrats initially tried to split the baby: “We don’t hate Jews; we just hate Israel.” The cognitive dissonance, though, has overwhelmed Democrats and, rather than rejecting both anti-Semitism and anti-Zionism, they’ve embraced both fervently.

And that is why the Democrat Party is becoming openly and proudly anti-Semitic.

UPDATES: Two of my friends weighed in with important information about Jewish American fealty to the Democrat Party. I knew this stuff, but totally forgot about it when I wrote my post. I’m so lucky I have such smart, informed blog friends:

Also, the great shift in Jewish support for Democrats over Republicans happened because of the migration patterns of the early 1900s. Before then, Jews were overwhelmingly Republican, in large part because of the Civil War and Reconstruction (with a few notable exceptions, such as the Charleston community). In the early 1900s, these Jews were overwhelmed with migrants from Eastern Europe and Russia, where Marxism was ascendent. The Jews that arrived were largely communist/Marxist sympathizers, in part because their ideologies squared well with shtetl /kibbutz collectivization and the promise (never kept) that Marxism would eliminate the class and religious distinctions that kept the Jews oppressed. The Jewish immigrants of that time simply applied these ideas to their New World experiences in the East Coast tenement slums.

And from David Foster:

Many Jews believe, based on perceptions of history, that Christians have historically been a threat, whereas the Democrats have been their defenders. Mary Antin, a Jewish immigrant who came to the US from Russia in the early 1900s, wrote that pogroms in her home country had sometimes been led by priests carrying crucifixes and it took her several years to get past an instinctual aversive reaction when passing by a Christian church. (She later became acquainted with several American priests and came to respect them for the work they were doing among the poor.)

I think I have previously posted the story the Polish town of Eishyshok. At the time of the German invasion in 1941 (the town was then part of Poland), many of the local Jews viewed the coming of the German troops with equanimity. The town had been occupied during the earlier war, and the German officers and troops of that time had been very well-behaved and even helpful, and those residents who had been POWs in Germany during WWI spoke highly of their good treatment. Too many of the town’s Jews failed to realize that “German soldier” meant something different in 1941 than it had in 1914.

Analogously, “Democratic politician” means something very different in 2018 than it did in 1960. There is an inertia in historical memory, and it can be dangerous.

See my post The Phobia(s) That May Destroy America