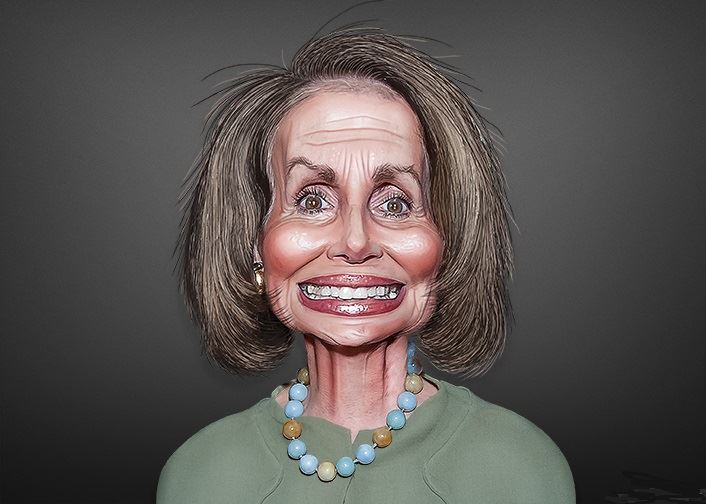 Nancy Pelosi’s “Impeachment Fact Sheet” asserts that investigating the Russia hoax constitutes an impeachable attempt to interfere in the 2020 election.

In his July 25 phone call, President Trump asked the President of the Ukraine to assist in an ongoing investigation into Ukrainian assistance to the Democrats in the 2016 election, to locate the DNC server supposedly now being held in the Ukraine and, later in the conversation, “to look into” the situation surrounding Joe Biden and his son Hunter.  Pelosi now collectively labels all of those investigations a “sham.”

Nancy Pelosi just turned the corner on the Democrats’ already very dangerous game.  If the law is such that progressives can operate above it in this country — including attempting coups to overturn elections — while holding the rest of the nation below its protections, then however this ends, it will include the end of our near 250 year experiment in republican government based on our Constitution.  This all started with whitewashing Hillary Clinton serial crimes: first, recklessly mishandling our nation’s secrets; second, trying to destroy the Trump campaign and install her in the Presidency.  The only way this ends with this nation intact is for justice and the law to be applied equally across party lines, and for those who violated the law to be held accountable.

The propaganda Pelosi released Tuesday is many things, the most important of which is a preemptive strike to undermine what many expect Horowitz, Barr, and Dunham will find through their ongoing investigations; namely, that the Russia hoax was an attempted coup (it most certainly was) executed by unlawful means (and I will be amazed if it wasn’t).  Those investigations are tied in part to the Ukraine.  We know that, at the Democrats’ request, Ukraine did in fact play a role in the 2016 election hoax. As Politico reported in January, 2017:

Ukrainian government officials tried to help Hillary Clinton and undermine Trump by publicly questioning his fitness for office. They also disseminated documents implicating a top Trump aide in corruption and suggested they were investigating the matter, only to back away after the election. And they helped Clinton’s allies research damaging information on Trump and his advisers, a Politico investigation found.

Here is the “Fact Sheet” Pelosi released today, which I have reformatted for this blog, including removing the graphics. In it, in speaking of the investigations as to which which Trump asked for Ukrainian assistance, Pelosi refers to all collectively as “sham investigations” (red-text emphasis mine):

On September 25, the White House released a record of President Trump’s call with Ukrainian President Zelensky, which paints a damning picture of Trump abusing
his office by pressing a foreign government to interfere in our 2020 elections.

President Trump has betrayed his oath of office, betrayed our national security and betrayed the integrity of our elections for his own personal political gain.

IN PRESIDENT TRUMP’S OWN WORDS

“I will say that we do a lot for Ukraine…. I wouldn’t say that it’s reciprocal necessarily because things are happening that are not good but the United States has been very very good to Ukraine.”

“I would like you to do us a favor though because our country has been through a lot and Ukraine knows a lot about it.”

“I will have Mr. Giuliani give you a call and I am also going to have Attorney General Barr call and we will get to the bottom of it.  I’m sure you will figure it out.”

“As I said on the phone, I think it’s crazy to withhold security assistance for help with a political campaign.”
– U.S. Ambassador Bill Taylor

In recent weeks, the nation has learned more about how President Trump abused the power of the presidency by using multiple levers of government – from Vice President
Pence to the State Department, including Secretary Mike Pompeo, Ambassador Gordon Sondland, and Ambassador Kurt Volker – to advance a scheme to undermine our 2020 elections for his political gain, and then to obstruct the congressional inquiry into that scheme.

Vice President Pence is entangled in this scandal. According to press reports, in September, Pence met with Ukrainian President Zelensky in Poland and “conveyed the news
that hundreds of millions of dollars in U.S. aid to Ukraine was not going to be released amid concerns about the country’s lagging efforts to combat corruption.” The withholding of aid may have been an effort to pressure Ukraine into announcing investigations into President Trump’s 2020 political rival to help the president’s reelection.

Text messages between Ambassadors Kurt Volker, Gordon Sondland and Bill Taylor paint the picture of a President who waged a months-long pressure campaign to shake down Ukraine for his own personal political gain, potentially using a White House presidential visit and critical military assistance to Ukraine as leverage:

THE TEXT MESSAGES BETWEEN U.S. OFFICIALS

Concerns About Ukraine Becoming an “Instrument” in U.S. Politics:

[7/21/19, 1:45:54 AM] Bill Taylor: Gordon, one thing Kurt and I talked about yesterday was Sasha Danyliuk’s point that President Zelenskyy is sensitive about Ukraine being taken seriously, not merely as an instrument in Washington domestic, reelection politics.

[7/21/19, 4:45:44 AM] Gordon Sondland: Absolutely, but we need to get the conversation started and the relationship built, irrespective of the pretext. I am worried about the alternative.

[9/1/19, 12:08:57 PM] Bill Taylor: Are we now saying that security assistance and WH meeting are conditioned on investigations?

The President of the United States is using the power of his office to solicit interference from a foreign country in the 2020 U.S. election . . . I am concerned these actions pose risks to U.S. national security . . .”

On September 26, the House Intelligence Committee released the redacted version of a whistleblower complaint filed with the Intelligence Community Inspector General, which the IG found to be of “urgent concern” and “credible.”

The White House’s record of the July 25 presidential call between Presidents Trump and Zelensky corroborates allegations made in the whistleblower complaint, in particular that President Trump betrayed his oath of office by using the U.S. government and outside actors to advance his scheme to shake down the Ukrainian government to interfere in the 2020 elections.

“I have received information from multiple U.S. Government officials that the President of the United States is using the power of his office to solicit interference
from a foreign country in the 2020 U.S. election. … The President’ s personal lawyer, Mr. Rudolph Giuliani, is a central figure in this effort. Attorney General Barr appears to be involved as well.”

“I am also concerned that these actions pose risks to U.S. national security and undermine the U.S. Government’s efforts to deter and counter foreign interference in U.S. elections.”

“[S]enior White House officials had intervened to ‘lock down’ all records of the phone call, especially the official word-for-word transcript of the call… the transcript was loaded into a separate electronic system… used to store and handle classified information of an especially sensitive nature.”

“One White House official described this act as an abuse of this electronic system because the call did not contain anything remotely sensitive from a national security perspective.”

As an aside, note that the House Speaker’s wholly inappropriate press release is quite selective.  Pelosi, in the text messages recited, includes the charge from Bill Taylor that Trump is withholding aid from the Ukraine for “help with a political campaign,” but leaves out Sondland’s reply:  ““Bill, I believe you are incorrect about President Trump’s intentions. The President has been crystal clear no quid pro quo’s [sic] of any kind. The President is trying to evaluate whether Ukraine is truly going to adopt the transparency and reforms that President Zelensky promised during his campaign.”  Further absent is any exploration of Bill Taylor’s role in setting this scenario up for Adam Schiff.  It turns out that Taylor and a Schiff staffer met together in the Ukraine in August shortly before Taylor suddenly started sending emails this issue of a quid pro quo, something wholly aimed at the 2020 election.  If Taylor and a Schiff staffer had met on a tarmac, one one can readily imagine Pelosi asserting that they were discussing grandchildren.

Democrats’ decision to fold into the impeachment mix an ongoing (and wholly appropriate) investigation into the 2016 Russian Hoax is part of the progressives’ full court press to set themselves beyond the reach of justice.  In addition to Pelosi, progressive journalists are creating a cottage industry out of writing daily articles calling any investigation into the Russian Hoax unfounded and a “conspiracy theory” that a deranged President Trump, set on personal revenge, is pushing.  For instance, this from Politico’s Natasha Bertrand and Daniel Lippman, reporting on the Barr / Durham investigation that is now circling Brennan and Clapper:

President Donald Trump’s obsession with former CIA director John Brennan could be on a collision course with an ongoing Justice Department probe as Attorney General Bill Barr takes a more hands-on approach to examining the intelligence community’s actions in 2016.

Barr has been meeting with the U.S.’ closest foreign intelligence allies in recent months, making repeated overseas trips as part of an investigation he is overseeing into the origins of the Russia probe and whether any inappropriate “spying” occurred on Trump’s campaign.

As part of that investigation, Barr and John Durham, the federal prosecutor he appointed to conduct it, have been probing a conspiracy theory for which there is little if any evidence, according to several people with knowledge of the matter: that a key player in the Russia probe, a professor named Joseph Mifsud, was actually a Western intelligence asset sent to discredit the Trump campaign — and that the CIA, under Brennan, was somehow involved.

Trump, meanwhile, has become “obsessed” with Brennan, who frequently gets under the president’s skin by publicly questioning his mental acuity and fitness for office, according to a former White House official. On Brennan, “it was always, ‘he’s an idiot, he’s a crook, we ought to investigate him,’” this person said, characterizing Trump’s outbursts.

Since the beginning of his presidency, Trump has also repeatedly attacked Brennan publicly, . . .

This impeachment — and by it the attempt to shut down any investigation into the Russia hoax — resembles something one would expect to see in the old Soviet Union, never in America.  Democrats are holding secret proceedings. They are denying the defendant (i.e., the President) and his political party even the rudiments of due process.  The only thing progressives are selectively releasing are those things that they believe support their case.  They are hiding all else from the public.  And where they wholly lack facts . . . they are using anonymous hearsay and the imprimatur of the IC IG (itself likely an act of sedition) to tie it all together.  And all of this while their lackeys in the press repeatedly condemn the Russia hoax investigation as illegitimate.

And now I see this travesty “impeachment” is being run even worse than I thought, for Schiff is trying to prevent Republicans on his committee from gaining full access to transcripts from the hearings. As Rep. Elise Stefanik (R-NY) explained yesterday:

I will be amazed if we survive this as a nation.