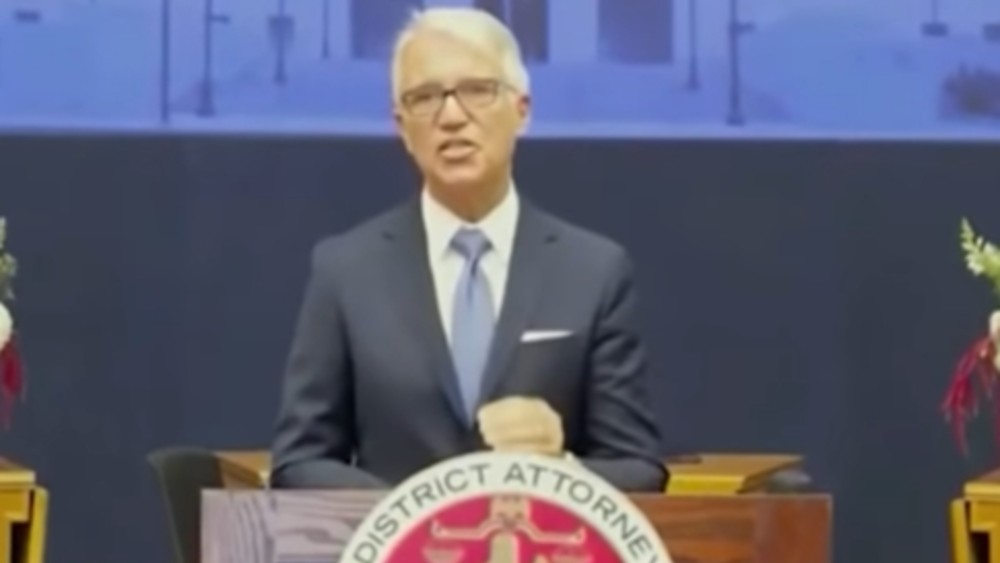 Conservatives need to embrace lawfare and bring suit against radical prosecutors, most of whom are funded by George Soros and are de facto rewriting the laws of their state.

Prosecutors and other officials funded by George Soros are ignoring the laws of their state to impose their brand of social justice, irrespective of the cost to the law-abiding. This violates the foremost duty of our government, which, according to Thomas Jefferson, is to “enable the people of a nation to live in safety and happiness.” In contrast,

If the government becomes a law-breaker, it breeds contempt for the law. It invites every man to become a law unto himself. It invites anarchy.

And that warning from Justice Brandeis is is particularly apropos today.

In the 1997 film Devil’s Advocate, Al Pacino plays Satan walking the earth as the senior partner in a criminal defense firm that takes on only the most shocking of cases with clients almost certainly guilty of the crimes with which they are charged. The firm wins every jury trial using tactics that transgress ethical boundaries. At the film’s conclusion, Pacino explains that he is destroying public trust in the institutions of society as a means of destroying human society itself. As he says:

We’re coming out, guns blazing. The two of you — all of us — acquittal after acquittal until the stench of it reaches so high into heaven it chokes the whole fucking lot of them! What we cannot legislate we will buy. What we cannot buy we will degrade. We will blow every fuse of enlightenment until it looks like a vandalized, neon sign! . . .

While the Devil’s Advocate is fiction, we are seeing a very real variant on this strategy being carried out by the megalomaniac, George Soros. In 31 of our major state and city governments, from New York state and New York City to San Francisco and Los Angeles among others, Soros has funded the election of prosecutors who are imbued with race-centric social justice ethos and who are intent on altering society by imposing their toxic ideology.

Every one of these Soros funded prosecutors is refusing, based on “racial justice,” to enforce laws passed by the legislatures in their states. Take, for instance, the recently elected District Attorney for Los Angeles California, George Gascon. Soros and a few other wealthy progressives, most of whom “lived far outside the county,” donated millions to Gascon, giving him twice the campaign funds of his rival. After winning the election in November, Gascon, in his first days in office, virtually did away with cash bail and sentencing enhancements, then nullified California’s “quality of life” laws as applied in Los Angles. This from RedState:

First, with regard to all of the policy changes announced today, Deputy District Attorneys are to amend ALL pending cases to conform with the new policy. This will have immediate and massive negative effects on public safety.

So, if someone violently rapes someone else but is homeless, is a $20 cash bail aligned with their ability to pay? This is madness!

Certain misdemeanors are to be “declined or dismissed before arraignment and without conditions unless ‘exceptions’ or ‘factors for consideration’ exist,” including:

Certainly some of these are misdemeanors where a prosecutor should have the discretion to dismiss the charge or decline to prosecute based on the specific circumstances of that case, but to have a blanket prohibition on prosecution is counterproductive and also makes the city even less desirable for law-abiding people. If police and criminals know that loitering and trespassing won’t be prosecuted, have fun trying to patronize a business without being accosted by panhandlers or worse.

Oh, yes, Los Angeles County DCFS has been a MODEL organization in effecting positive change for its clients. That’s sarcasm.

Obviously a victim may need services even if they eventually end up not cooperating with the prosecution of their attacker; that’s what social services are for. And, there are so many problems with the policy in the second bullet point that it’s worthy of entirely separate post.

Like leftists all over 2020 America, [Gascon’s] reimagining criminal justice as a world without police, without laws, and without jails. While he tries to sell a Garden of Eden, I’m imagining Mad Max rules . . .

So why do Gascon and the other Soros-funded prosecutors think they can take such actions?

The reason is the common law doctrine of “prosecutorial discretion.” Under this doctrine, long recognized in the law and with precious few exceptions, a prosecutor is immune from suit for his decision to prosecute or not prosecute a case, nor can a judge (Judge Sullivan and the DC Circuit in the Michael Flynn fiasco aside) review a prosecutor’s decision.

The justification for this “prosecutorial discretion” rests on Constitutional separation of powers. At both federal and state level, it is only the executive who is tasked in the respective Constitutions to “take care that the laws be faithfully executed,” Prosecutors fulfill this duty as agents of the executive. Conversely, the legislature is limited to considering and passing laws that define social policy and courts are limited to deciding cases in respect of those laws.

Agree with it or not, prosecutorial discretion made sense when prosecutors stayed within their mandate to enforce the law, relying on their discretion to manage their limited resources and to show mercy and forebearance in those individual situations where it was justified. But that is at odds with the reality of a Soros-funded prosecutor like Gascon.

Gascon is not relying on the separation of powers to perform his function. Instead, he is violating the separation. Gascon’s decision, to globally nullify duly passed laws, is a legislative function solely within the purview of the legislature.  The legislature collectively establishes the social policy of California through its laws.  It is not within the power of Gascon to impose a new social policy in Los Angeles based on his ideology.  That is acting as a tyrant and it wholly undercuts the rationale for granting Gascon the protections afforded by prosecutorial discretion.

Leaving aside questions of standing for the moment, it would behoove conservatives living in areas being terrorized by Soros-funded tyrannical prosecutors to turn to the courts to seek relief. Gascon should be subject to court injunctions to enforce all of the laws of his state. Moreover, any citizen who suffers injury at the hands of a criminal who would have been in jail but for the malfeasance of Gascon should be able to seek compensatory and punitive damages from Gascon in his individual capacity.