Why is this a “time warp edition”? Because even though I’m publishing it on Saturday, I actually wrote it on Friday. The reason delayed publishing is because I’m spending all day Saturday attending part II of my CERT training. I expect the training to be more of the same stuff as last week: really nice, well-informed, generous people inefficiently teaching four hours of useful information over the course of eight hours.

Rather than leaving my blog fallow for that time, I thought I’d prep a post in advance. The only reason I’m mentioning the 14-hour lead time is to explain why, if something dramatic happens in the news tomorrow, you won’t read about it at the Bookworm Room. And now, it’s time for yesterday’s news today!

Selwyn Duke has an interesting theory about Obama’s concern for protecting Africans over Americans, and it has nothing to do with theories about Obama’s natal place. Instead, Duke points an internationalist outlook that disdains any sense of or respect for Americanism. Duke’s isn’t a new idea, but I really like how he uses Ebola as a stepping stone on the way to this analysis.

The next big Obamacare wave is about to hit

Even the nice, bouncy, helpful language Time Magazine employs doesn’t hide the fact that, for most of those who managed to snag some Obamacare last year, the torture begins anew this year. And lets not even think about all the employed people who will lose their insurance or their jobs thanks to the 2015 Obamacare regs kicking in.

The media and the disappearing Gruber

One of the beautiful things about the Jonathan Gruber videos is they way they provide such clarity about the media’s cone of silence when it comes to things that are harmful to the administration. It’s always been this way, of course. It was Andrew Breitbart and James O’Keefe who figured out that the way to deal with monolithic media wall isn’t to use the old technique of dropping a single, comprehensive bombshell.  The media would quickly bury those bombshells, only to claim at some later point that the bombshell was old news. Instead, as Breitbart and O’Keefe demonstrated, the effective technique to explode that cone of silence is to dribble the story out in ever-more sensational increments, all of which float around in the blogosphere until it’s impossible for the MSM to ignore.

And there’s definitely more Gruber to be had

Friday saw the unveiling of Gruber tape numbers 5 and 6. Yid with Lid does a nice job explaining No. 5 and Ace tackles No. 6 — both videotapes are bad, revealing Democrat contempt for Americans and the rank, cynical dishonesty in Washington.

I’ve been thinking a great deal about urbanization lately. It’s become quite the issue here in Marin, as the modern-day urban planners plot to turn our green suburban county (which is considered environmentally un-green because people drive cars) into a gray city (which is considered green, because people take public transportation).  Let me count off just a few problems with this trend:

First, we paid the big bucks to live in Marin.  Having planners urbanize, uglify, and overcrowd our county, bringing down home values, it is a form of forced government taking without any due process.

Second, we don’t have enough water around here (and environmentalists, unions, and trial lawyers make it impossible to create more reservoirs) so the more densely populated we become, the more medieval our lifestyle gets in terms of minimal water usage.

Third, it turns out that cities are anything but green.  While they have mass transit, the nature of cities is such that it takes an enormous amount of energy to build and maintain them. Part of the problem is something unique to concrete jungles: they magnify weather conditions. Hot days become hotter and cold days become colder, with both extremes putting heavy demands on fossil fuel.

Fourth, as the post-election map shows, cities are Democrat and everything else is conservative: 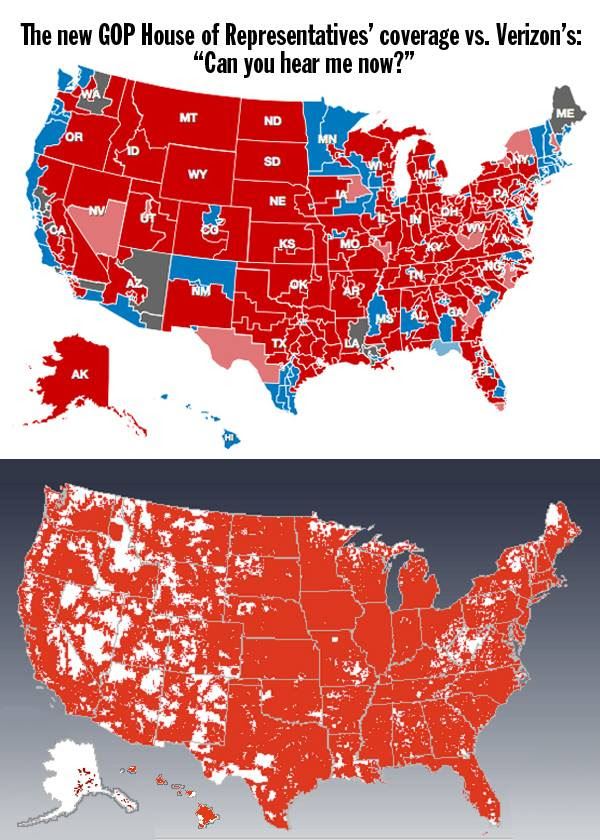 Fifth, thanks to changes to the way in which cars use energy, those cars zipping around Marin and other suburbs (especially high-end suburbs that can afford high-end, green cars) are generating very little pollution. In addition, our greenbelts absorb a great deal of CO2, so suburbs eat their pollution, as well as some of the pollution from neighboring cities. The cities generate far more dirty air than their limited greenery can consume.

Those six thoughts are why I take very seriously Daniel Greenfield’s article about Obama’s plan to use his amnesty bill to accelerate the Democrats’ existing desire to urbanize America in order to gain a political advantage.

What’s putting a slight wrench in the works is that it turns out that Americans, while valuing new blood and immigrant energy, don’t like cheating. They want their immigrants to appear in orderly fashion, without criminal records or rogue viruses, parasites, and bacteria. It also turns out that suburbanites aren’t that thrilled about having their verdant paradises turned into urban jungles. In Marin, ordinary (and often Progressive) homeowners are becoming rabid anti-government NIMBY-ites.

Of course, one can’t entirely stifle change and development. A couple of days ago, I heard a speech from Bob Silvestri, a Brooklyn-born Marinite who believes that development shouldn’t be organized at a state, national, or even “area” level, but should be decided upon locally, by the residents in a given community. More than that, he thinks that there are ways to develop that are truly green (rather than big boondoggles for politically connected corporations); that favor the little guy, not the incredibly huge, wealthy developers who plop monstrosities down here and there; and that integrate well with the existing community, rather than destroying it.

Silvestri’s non-profit organization explains more about this modest, locally-driven approach to development.  If I had to define the organization’s philosophy (based on listening to Bob talk and looking at his website), I’d say libertarian with an aesthetic design sensibility that recognizes that, while we’re definitely nature’s stewards, we don’t have an obligation to erase ourselves entirely.

I’ve said for ages that I can’t think of a reason to oppose civil unions, that allow states to decide which relationship unions they wish to promote.  Such unions also allow gay partners an easy shortcut to get benefits that the law confers on married people, and that all others must obtain through sometimes laborious contracts. Indeed, I’ve gone so far as to say that states should get out of the “marriage” business entirely and leave “marriage” to religious institutions and civil unions to the civitas. At least one British gay man, David Coburn, a UKIP Member of the European Parliament, turns out to agree with my approach, calling out the radical homosexual lobby for trying to impose its will on the faithful.

Cleanliness is next to godliness 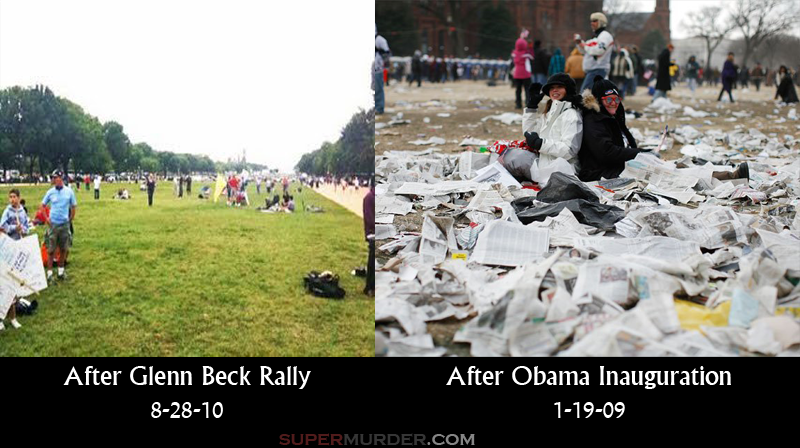 Says Glenn Reynolds of Obama’s amnesty plan:  “WE MUST DISSOLVE THE PEOPLE AND ELECT ANOTHER.” That sounds about right for a president who says that the message he received from an election dealing a body blow his party in Congress is that he should ignore both Congress and the Constitution, and proceed in King George mode.

The news isn’t really that a Department of Justice lawyer lied. As we’ve learned through the course of Eric Holder’s tenure, the Leftist end always justifies the dishonest means (see also: Gruber), making DOJ lying a dog bites man story. What’s different this time is that the DOJ lawyer was forced to admit that he lied.

The Daily Caller caught something very peculiar. Before broadcasting a feel-good segment about a Navy mom surprising her daughter, CNN gave notice to its viewers: 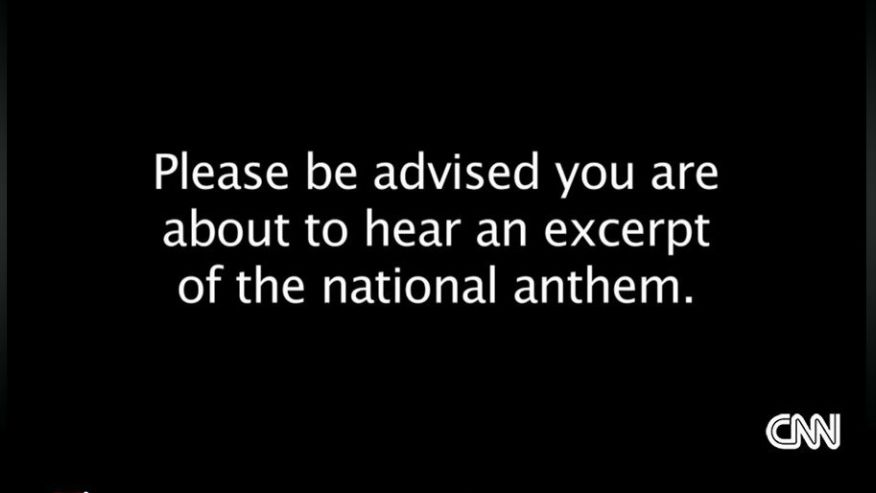 I’d like to believe that this wasn’t a trigger warning for those who have a pathological fear of national anthems generally, The Star Spangled Banner, or patriotism. Instead, I’m going to assume until proven otherwise that this was a helpful heads-up to people that they should be ready to stand and place their hands on their hearts.